Blowin' in the Wind

When we returned from Thanksgiving in Anchorage, there were about 6cm of new snow on the ground. Time to plow out the driveway. The Clockwork Orange had been giving me a few problems. While trying to horse the thing around, I remembered the wheel lock on the contraption -- it is used to facilitate turns, for the average suburban snowblower-jockey. OK, squeeeze the handle and release. That should unlock the wheel -- and ol' Clockwork took off! 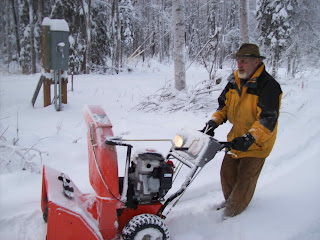 Moral: never assume anything. I assumed the whaeel lock was off. Had I tried this before, it would have saved me a lot of blood, toil, sweat and tears, to quote Sir Winston Churchill. Incredible. But now it was clear that I only had half a blower. Only the right half of the auger was working. Aha, said I, it broke a shear pin. Sure enough. The next day my son and I (a) replaced the shear pin and (b) raised the skids of the ground 30mm. This is because I have an uneven gravel driveway. Amazing! A new machine is born. 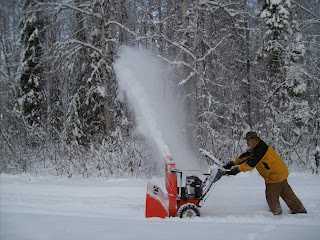 As you can see, it blows the snow high, wide and handsome; so well did it behave that my son and I decided that a renaming was in order, and it is now Horatio Snowblower. I feel much more confident about dealing with winter snows after this episode. The above photo was taken before we raised the skids; now you don't have to do anything but hold down the two clutches (one controls the drive, the other engages the auger and second stage).
Posted by JRC at 7:18 PM
Labels: driveway, snow, Snowthrower