The Case of the Rotating Porch, part II

The next step in the porch saga was to put some posts under the porch, to inhibit rotation -- as I said, end of cantilever. My original idea was to just bury some posts in the ground. I decided that was a Bad Idea. Posts rot. The way to avoid this is to use concrete footings. Concrete does not rot. My son had kindly dug some holes to put the posts into (yes, end a sentence with a preposition. How clumsy does "into which to put the posts" sound?). So I dug out the holes, because I want an upside-down T form for the footings. 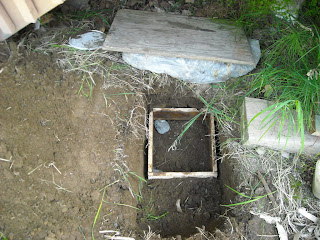 The size of the form was determined by the amount of deconstructed cargo pallets I had on hand, and not by complex strength-of-materials calculations. Providentially it worked out to 30 cm sides, or a foot gringo, which is what I would have done anyway. Next I loaded in some steel strap, easily obtained (and very useful) scrap stuff used to reinforce packing boxes; cost $0.00. 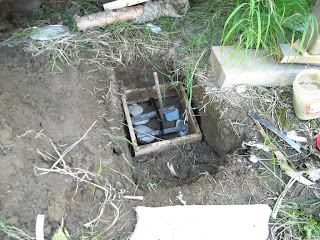 Some stones get the strap off the ground. There is a salvaged piece of genuine rebar (reinforcement bar, known as cabilla in Venezuela) to support the center post, which comes next. But first let's get the footing done. So we go off to Home Depot (or Lowe's, but the latter had the pertinent section closed off that day) and get two sacks (50 Kg or 100lb) of ready-mix concrete. For small jobs, this is cost-effective at $8.00 a sack. By the way, it pays to coat your forms on the inside with old motor oil. Makes it much easier to remove. Find suitable container, add water, mix up: 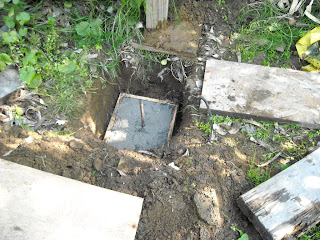 And there's my footing. I let it cure a couple of days, as I should not have; makes a better bond if you don't. Next, a form nailed up out of my salvaged cargo pallets, some more sackcrete, and voila: Now let that cure a few days. I left it a week. Putting loads on uncured concrete is a really Bad Idea. On the rightmost post I had a problem due to the erratic nature of the boards I used for a form: 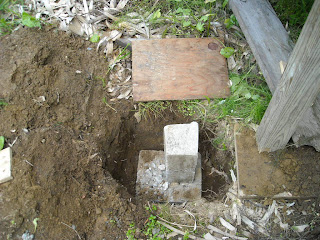 Not quite square, is it? Neither were the forms. But no matter, it will work. This is not, after all, the Empire State building.

The next step (after the cure of the concrete) is to jack up the porch and slip in some 4x4, which I sawed off of a conveniently abandoned real estate sign (hence the odd color): 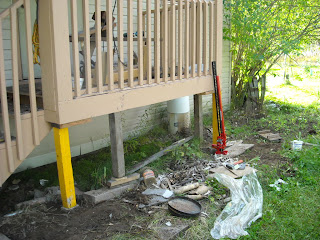 And she is finished. Note the red farm jack sitting under the porch. The thing is one of the most useful devices, second only to a come-along, that one can have. It will lift about two tons. With the jack, I jacked up the porch until about level, and cut the posts to fit. In the spring, I'll repeat the process, because it will settle and heave during the winter. It will probably have to be shimmed.

So far so good. But winter (the real Alaska kind) is yet to come. We will see what happens. Oh, yes, and we have to paint it to match. But that will wait until spring. Can't paint at -10C.
Posted by JRC at 7:35 PM
Labels: concrete, foundations, porch