The Case of the Rotating Porch, part I

The house on Chalupy Acres came with a cantilevered porch, as you can see in the following photo. 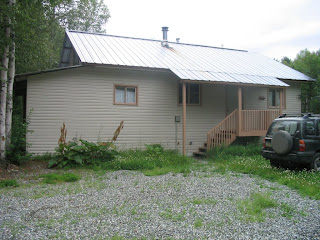 As you may see, there is no support under the porch. That is the meaning of "cantilever," although in this case there is no counter-lever, the back support is attached to a 2x4 nailed to the wall of the house. This is fine in summer, but in winter we must consider snow loads. The effect of a load on the roof is to cause the cantilever to rotate around its support. The load is taken, in my case, by three (3) nails per rafter pounded into some 2x4 pieces. Not enough, as I found out last winter. So the porch pulled out about 10cm of nails and was hanging, as it were, from a thread. This had to be fixed, and it was my big summer project. The first step was to prop up the porch by temporary supports -- some 4x4 stuff I had hanging about, plus some boards as a bottom support.

Then it was time to think about what to do next. There are two problems: (1) the cantilever design is inadequate for a real snow load and (2) the scheme adopted to hold the rafters to the plate (the topmost beam in the house) was totally inadequate.
The previous inhabitants must have spent a great deal of effort shoveling snow off the porch, or (more likely) did not encounter extended snow loads. Or both.

So the solution is twofold: (1) make some decent brackets to tie the rafters to the plate and (2) put some permanent supports under the porch. Bye-bye, cantilever.

So this post deals with brackets. At the hardware store I got some 3/8" (about 8mm) steel strap, and proceeded to forge L-shaped brackets -- perhaps "hot-bending" is a better word -- but not only must the brackets be L-shaped, the short arm of the L has to be twisted to match the pitch of the roof. Then holes for lag bolts must be drilled. The strap cost $10 and the lag bolts about the same, so I am $20 in the hole. However, compared to what a contractor would charge this is chump change.

Now, bending an 8mm piece of steel may sound simple, but it is not. Just try it. I rigged an improvised forge for the purpose: 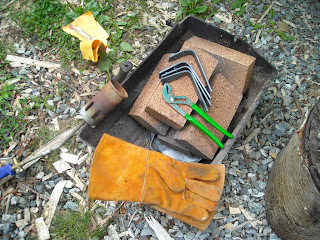 At the left you can see the Dragon Lady, another Chalupy Icon. This is a propane torch connected to a midsize propane tank -- 10 Kg (20 lb) of propane. I use the Dragon Lady for a great many purposes: melting ice in the winter, flaming weeds, starting charcoal fires, starting the garbage-burning fires, forging... a useful Lady she is. Here she is stoking the oven made of firebrick and an abandoned barbecue . The pliers substitute for blacksmith tongs. On top of the oven, some brackets finished up. In essence, heat bracket (drilled) to red-hot; then stick it in a vise and start twisting. Mistakes are not fatal: heat it up and do it over.

And here is a bracket (several, in fact) in place: 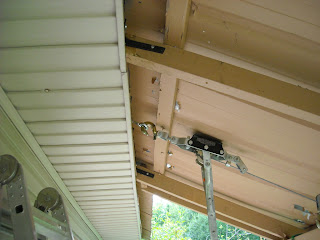 Once I had the brackets, I thought I could crank the rafters back to touch the plate with a socket wrench. Ha! Not a chance. After several false starts, I went to the hardware store, bought two eyebolts (horrors, another $5), drilled some holes, screwed in the eyebolts, and employed the come-along, a device essential to bush Alaska, AKA a hand (ratcheted) winch. You see above the come-along pulling the rafter back to the plate. Your come-along can also extract your car from a snow drift, move a log when you can't get the tractor in there, and any time a heavy object can be pulled into place. It was a little hairy operating the come-along from a ladder; after the tension gets up it tends to pull you off the ladder. Most of the time, the ladder was unusable without extra support: 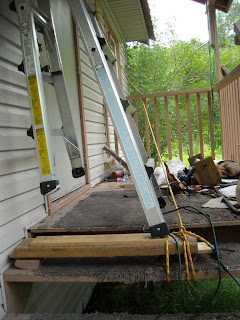 The next installment is getting suports under the porch.
Posted by JRC at 5:15 PM
Labels: fixing, forging, porch, projects