Winter is here. There are 30cm (or a foot in gringo units) of snow on the ground, and more on the way. This is, after all, Alaska. So it might be fun to flash back to last year's garden. It reminds you that summer will come again. All part of living. If you like green all year round, move to the tropics. I grew up there, and I find it boring. Anyway, this is garden 1.3. Here it is, early summer ought-nine: 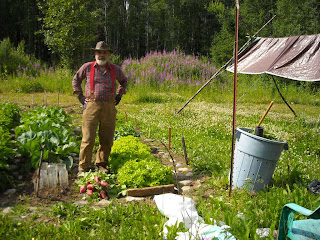 Note the radishes at my feet. As big as a potato. They should have been pulled earlier, but I'm not used to the idea of 30-day radishes. Also note the pretty purple-pink flowers in the background. That's fireweed. The leaves make a useful addition to salads. I was amazed to find that this grows in Finland, and I assume Norway and Sweden as well. Here are some turnips. The knife gives an idea of scale: 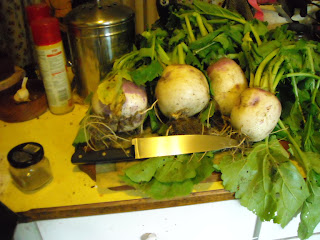 Not bad. Couldn't enter them in the state fair, but good eating! And we have cauliflower, broccoli, and another turnip. The secret of cauliflower is to tie up the outer leaves. This blanches the head, and keeps it solid. Who knew? My first attempts all went to seed. 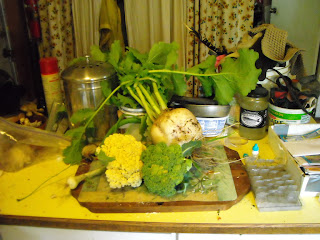 Eventually late August comes; time to dig potatoes. My volunteer crew at work; my daughter and her friend: 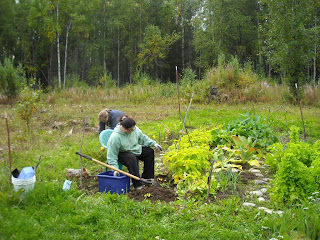 And the final payoff: 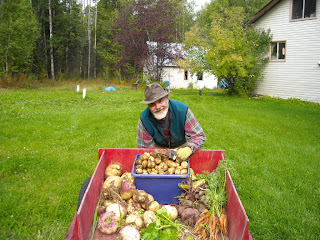 This shot is posed! And composed. But the veggies are real. I'm dining off of them now. There is no comparison between store-bought and home-grown veggies. Different species. As Darth Spader might say, "my plans for agricultural domination are progressing."
Posted by JRC at 7:00 PM
Labels: conuco 1.3, flashback, garden, harvest