Having made all those miniature carving tools, the time had come to do something with them, besides carving ducks. I wonder if I can do a human figure? Hmmm. I was inspired by a style that in Venezuela is called "Selva Negra.", i.e. Black Forest, after the German Schwartzwald. This is rustic carving, not fine art. Fine art is all very well, but it is neither my interest nor my ability. So was born Woodsman. Picture will follow. When you come right down to it, carving a human figure is not unlike carving a duck. Start with a block of wood and cut away anything that doesn't look like a duck, or a human as the case may be. Woodsman sat on my table for many days -- I was quite proud of it, rustic though it may be -- and eventually I though he needed a companion. Out with the wood scraps I collect; sketch, saw, chip --- and so we have Axeman, in keeping with the forest motif. Then I began to think of a tableau. When I was in French class in High School, we dreaded the command "au tableau", which meant that we had to step up to the blackboard and perform. But I subsequently learned that tableau has other meanings, such as "an arrangement". Here is the woodsman tableau, before I put it on the wall: 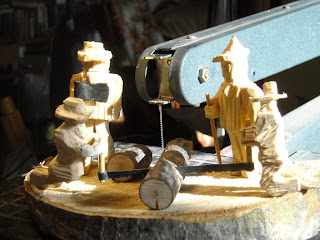 Woodsman, with a stick in hand (actually a barbecue skewer) is behind at right. He is 85mm tall, that sets the scale for this tableau. Axeman is behind, somewhat washed out by the flash on the camera. His axe was made in the same way my carving tools were, from a chainsaw recoil starter spring. The two sawyers were very difficult to carve; they are not symmetrical, so you can't just saw them out and start carving. Their saw is another piece of chainsaw spring. It has teeth filed in it, and it actually cuts, but slowly because setting the teeth would be a monumental task.

Having done this one, the next thing that practically made itself was the Darth Spader tableau: 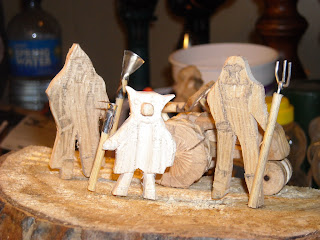 Left to right, Obi-Farm Kenobi, Ham Solo, the Darthall tractor, and Darth himself. They are two-dimensional, of course. After all, they are cartoon characters. You haven't met Ham Solo, I believe. He is, of course, a pig. Other pigs in this (developing) deama are Leia Organic and Luke Stywalker. Three little pigs...

The tractor deserves a post all by itself. It is one of my favorite creatures.

I am now working on the crafts tableau. There will be a weaver, a blacksmith, and a carpenter at least. But that's a whole nother post.
Posted by JRC at 7:26 PM
Labels: carving, figures