Retrospective: Going to the dogs

As I write, the Iditarod dog sled race is going on. This is to Alaska what the World Cup is to football (soccer, to my american readers). The race goes from Anchorage to Nome, about 1,161 miles (1,868 Km). You can find out all kinds of things about this race by googling on "Iditarod." The leader is only about 170 miles (250-odd Km) from Nome. In the old days, it would have been a month. Now a couple weeks suffices! But I don't really want to discuss the Iditarod at length; there is lots of stuff on the web. Instead, let me relate my own experience with dog sleds.

Last year, I had a visit from a friend, who comes from the southern hemisphere, Buenos Aires by name. Now in Bs.As (as it is usually abbreviated) there is a winter, and it gets down to 0C on occasion, but by and large it remains above freezing in the winter. Quite a shock awaited her: -20C considered tropical. But my friend in Bs. As had a friend in Juneau (Brenda) , who had a friend in Willow (Kathy), who ran dogs and so we wound up visiting Kathy. As we drove up we were greeted by what seemed to be an infinite number of dogs: 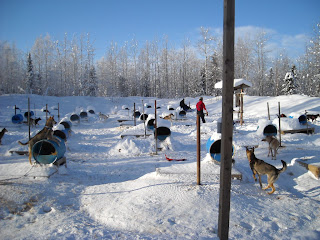 The first thing you notice, indeed it is forced upon you, is the enormous dog quarters area. There are probably forty-odd dogs there. They are very friendly, and they talk to you. It would be unkind to call it "cacophonous," because, after all, they are trying to communicate! What they really would like is to go run. In the background is Tom, a Yorkshireman(!) who is in charge of the dogs -- the "handler," as he is called. He feeds them, waters them, cleans up after them, but as a consolation, often drives them as well. So we met Kathy, and the two ladies agreed that a drive would be just a thing. Fortunately there were lots of spare duds. Soon our Argentina was outfitted fit to kill: 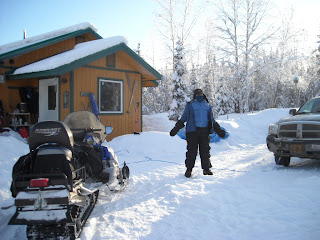 Dog driving (at -25C) is a serious business. You should have padded bibs, a parka, several pairs of wool socks, and insulated boots. Somehow the dogs manage without these things, but we did put booties on them that day.

I had brought my skis, thinking I would go skiing while the ladies drove, but a better idea emerged: two sleds would be hitched, one for the ladies and one for the gents. With Tom as my mentor I would ride along on sled 2. There were enough dogs to make up two sleds, say 16 dogs per sled. So off we went: 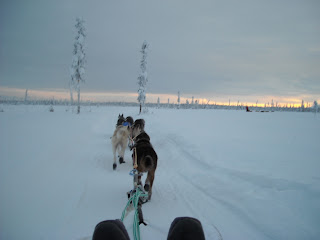 Notice that it's clouding up. As it does, the temperature will rise -- I predicted -10C as final temperature; I was dead on! Experience helps. Anyway, notice the Alaska trace (or hitch). There is one long trace, and the dogs are hitched to that. This is very efficient. The Greenland Inuit hitch dogs fan-wise; with all due respect, this is not the best hitch.

At first I rode seated in the sled. But after a while I got to share the "running board" on the sled with Tom. I learned a lot from Tom. Sleds have a brake -- a flat plate you step on. This, obviously, slows the sled by dragging. There is also a great big hook. This is the anchor. When you stop, you do not want the dogs deciding to go somewhere, urgently. You set the anchor. The sled must be leaned in turns. You do this by putting body weight outboard. 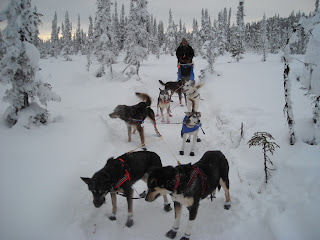 The dogs are controlled by voice command. You say "let's go" amd faster than the speed of light, you are off! Remember to lean on the turns. If there is a fork in the trail, say "gee" to go right, and "haw" to go left. Don't have to shout; dogs hear very well and these dogs are trained to a hair. Want to stop? Say "whoa." Just like a mule team in the old days. In action, it looks like this: 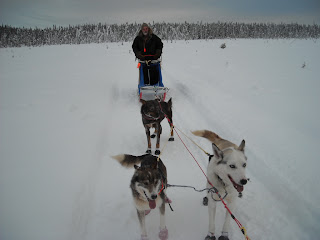 Or from the driver's point of view, like this: 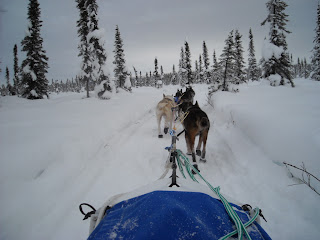 A great day, not given to everyone.

Meanwhile, just to end on an Iditarod note, here is a team from last year's Iditarod, about 2Km away from home: 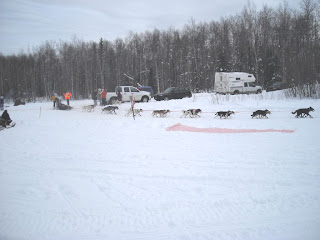 They have a whole lot more dogs! This is serious stuff, after all. And we all gather around to watch: 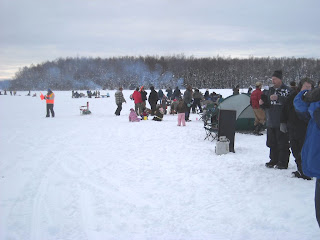 Barbecues, beer, and dogs. What could be more Alaska?
Posted by JRC at 7:04 PM