The Seat from the Pants

No, it's not at all flying an airplane by the seat of your pants. But the time has come to make a seat for the stick stool which I built. So what to do? A true Appalchian would use hickory bast. Last a hundred years, too. But unfortunately hickory is not a wood found anywhere near Alaska. Hmmm. At this point I was in one of the Willow thrift stores and my eye lit on a pair of blue jeans, cheap. Aha! So I took the jeans home and deconstructed the pants -- a tedious chore. Then I cut the pants into strips and hemmed them on my antique sewing machine. (I will add parenthetically that the instuction manuals for practically every Singer sewing machine ever built are online somewhere; Google is your friend). Sooo... we have some strips. 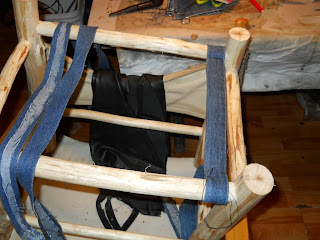 Now, how to apply the strips? I thought of sewing them all together and winding them on to the rail, as in homemade quaker tape. That wastes a lot of pants. So instead I sewed them, by hand, labouriously on to the rails. I am not the world's greatest seamster but I did learn to repair canvas tents in my misspent youth, so I used carpet thread and a short needle. You can see the first strip sewn in in the picture above.

Here is the current seat state: 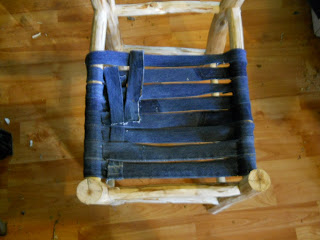 I am about 75% through on the shorts. The pieces left over are woven through to show how the thing is supposed to look eventually. Actually, I think it's rather Appalachian after all. Pa built the stool and handed it over to Ma, who took a pair of Pa's worn-out overalls (pronounced "overhauls" by cognoscenti) apart and made a seat that way, not being about to let her wood stove go out while she searched for hickory bast. Now I have run out of strips. I still have some pants left, so it will be a close race. Got to cut out more strips, hem them, and sew them in. But, in modern argot, it will be a cool stool.
Posted by JRC at 6:45 PM
Labels: furniture, jean seat, stick chair