I think the pole lathe (in my case the bungee lathe) is an ideal tool for young children. The effort required is just pulling down a bungee cord -- even a child can do that! So a few days ago Neoni and her friend came by, saying that they wanted to build something. Anything in particular? We're not sure. Far be it from me to refuse them, so I showed them the candlestick (this is what you could make -- the carrot) and then we put a piece of alder (soft, good for kids) into the lathe and off we went. Having shown them the carrot, of course, we have to introduce the stick. This is turning the piece down to a cylinder before shaping it. 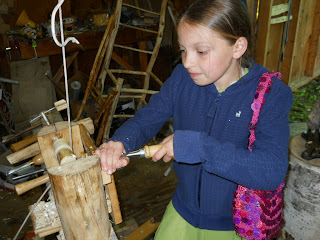 Neoni's friend turned out to be astoundingly good at this. She has the touch. Turning on a pole lathe requires much more finesse than turning on powered lathes. In the latter, the motor powers you out of most of your errors. In the former, an error is a jammed tool. There are three variables (we engineers call it "degrees of freedom") viz. The amount the tool is advanced, the angle at which you attack the wood, and the twist of your wrist which affects the amount of wood you remove. The two girls took turns getting a cylinder. 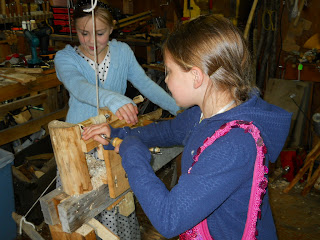 The pole lathe is about as safe as you can get with a child and an edged tool. On a power lathe they could get the tool thrown into their face. Bad news. Besides, if they ever go to power, they will have learned how to hold tools for maximum effect.

In the end we made a very respectable candlestick for Neoni's friend. She will give it to her mother (or her father) as a present! Once we started turning for real, with a spindle gouge, I was too busy to take pictures. The girls tend to get fascinated by the cuts and go too deep. Oooh, look at the shavings coming off! Me: Keep that tool moving! I allowed sandpaper to smooth it out. They are young, after all! We were at it one hour, and Friend allowed as how she thought it was ten minutes. She loves the spindle gouge; it is just her size.

On the whole, a stellar afternoon.
Posted by JRC at 5:46 PM
Labels: candlestick, kids, pole lathe