The other day I was returning from my daily walk when I spied a lovely rainbow. I walked 20 meters forward, to clear the ugly power lines, and it had faded in that little time! But I snapped it anyway. 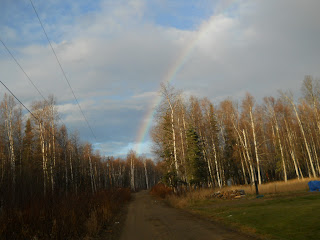 Legend, presumably Irish, says that there's a pot of gold at the end of that rainbow. Nonsense, of course! But not in Willow. The town of Willow owes its existence to gold. Gold was found in Willow creek around the turn of the 19th century, and the town grew around the mining operations. Now, the claims are panned out and the town is a shadow of its once-booming self. This is true for almost every town in Alaska, including Juneau, the state capital.

But there is still gold in Willow creek. Not in commercial quantities! But you could probably turn up a nugget or two, or at least some flakes, if you knew where to pan. And how to pan. So there probably is some gold under that rainbow, if not a whole pot.
Posted by JRC at 6:39 PM
Labels: gold mining, rainbow, scenic