In the old days of Alaska, there was gold mining and little else. The sourdoughs, as the old prospectors were called (what we call "newbies" were called cheechakos) would work a claim, panning or placer according to your means; it was all well as long as nuggets came out in the wash, as it were. But sooner or later you would get nothing but a thin sprinkling of gold dust. This meant your claim was worked out; the dust was called termination dust. No more gold; time to go somewhere else.

In modern Alaska, the term "termination dust" now means the first snowfall on the mountaintops. Fall is officially finito. Today I drove down to big Lake to do some grocery shopping; as I drove over the hill there it was -- termination dust. The storm that put it there didn't have enough horsepower (or wattage, if you prefer) to push over the mountains, but it left a new coat of snow. It means winter is here. Having put the snow tires on the car yesterday, I have completed the essential chores. I only regret I didn't take a picture -- I even had the camera, but didn't think of it. Blast. Maybe tomorrow I can return and do the picture.

Added next day: I did. 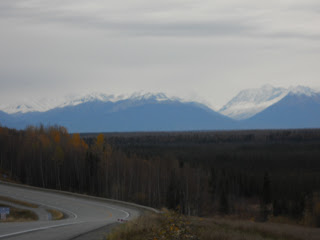 The light was awful -- flat and washed out. But you can see the Chugach mountains south of me. This was taken from about mile 60 on the Parks highway, which connects Wasilla with Fairbanks. My new camera needs a while to focus and the shot is not so good, but at least you can see t6he dust on the mountains!
Posted by JRC at 6:54 PM
Labels: fall, termination dust, winter