Christmas is past, presents have been delivered. So at last I can post some of the projects that have been unpostable due to giving the show away for the recipient. The oldest project is the "eskimo" knife, the Ulu. I made four ulus, out of a discarded circular saw blade -- I am sure you know what a circular saw blade looks like! So the first step is to cut the teeth off and then to cut the blade into quarters like a pie. I used an abrasive saw blade on a moto-tool knock-off and it was a chore. No mean feat, the sawblades are intended for tool abusers, i.e. contractors. However, I wound up with four quarters and the hole where the arbor of the saw goes. No pictures at this stage, I was too absorbed by the process.

Then we ground an edge on the blade. My Grizzly Tools wet grinder was right up to this job, but.. 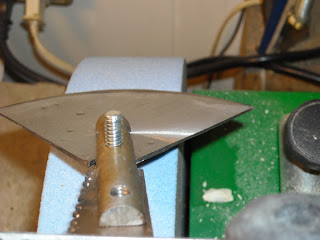 ... I had to improvise a jig for the grinding process, because the edge of an ulu is circular. The blade is held in a clamp jaw I made long ago; it clamps to a scrap piece of steel, a sawblade in fact, and I rotate the whole thing to get a circular grind. There is no pivot pin (I said it was improvised!) so my grind is a bit freehand. But it worked.

Here are my four blades. The right-hand one is off the grinder; the others wait their turn. 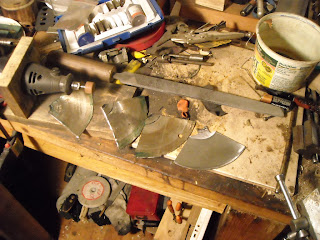 The rightmost blade has had some more cutting done on it, so it can accomodate a handle. The Ulus I made are called Fish River style, I find them easier to make than other styles because there is less cutting to do! There is a lot of information on the net as to styles. I found no articles on making them; maybe wrong search parameters. There is, however, an article on making them by the Rev. J.D. Hooker on Backwoods Home magazine, which inspired this project.

At this point I decided to put a jeweled or engine-turned finish on the blades. What you do is coat the blades with an abrasive. After some experimentation, good old Brasso was the best bet. Then you whirl a cylinder-shaped object over the blade -- preferably in a drill press, I would hate to do this by hand. 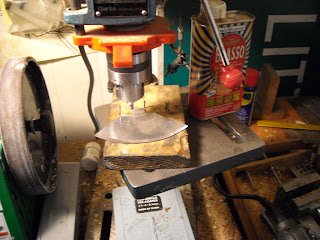 Above, the can of Brasso lurks in the background. I am using a worn-down moto-tool accessory as a cutter. The idea is to grind a little circle into the blade. You overlap succesive circles. I did all this by eye; there may be jigs but darned if I know how to make one. Here are a couple of finished ones:

It makes a very pretty finish. It is also very labor-intensive. I doubt that there are any Ulus in Alaska with engine-turned finish, except these four. I turned out a handle on the Taig lathe to see how they handled. I was very pleased with the results. They needed honing, of course. Next step was to turn some handles out of birch branches, a straightforward turning job. I deliberately made them all different shapes. 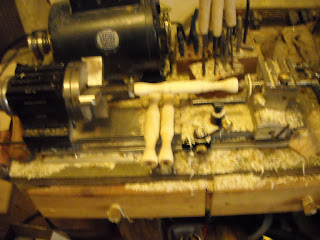 The last step is to cut a mortise in the handle to take the cutout on the blade. The mortise is about 2mm so I had to make a 2mm mortise chisel first. It has been very useful since then. Just for insurance, I epoxied the blades to the handles. 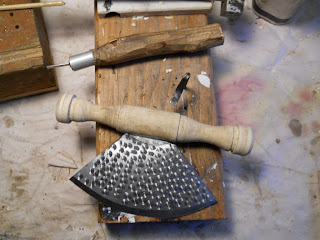 And behold, a finished Ulu. The mortise chisel lurks in the back, ready for the next task. There is one ulu with a hole in the blade. I kept that one for myself. I have used it every day, just about, since I made them in November 2010. They are a fantastic slicer, dicer, chopper, and general-purpose knife. Up in Barrow, the good Inuit ladies use them to flense whales, this being a very important part of Native culture. So they are up to almost any job. Mine are small, but I have a great big saw blade in the shop ready for the next batch.

If I made these things for a living, the first thing I would do is get myself an angle grinder. Doing ulus on a moto-tool is a chore, as I said. An angle grinder with an abrasive wheel, that's the ticket. Hmmm.
Posted by JRC at 6:12 PM