A Tale of Three Saws

It is none too easy for the home tool maker to make a saw without a machine shop, which would exceed by far the cost of going out and buying a saw. Well, given the cost of some good Euro or Japanese tools these days, maybe I should qualify that. It's still hard to make a saw. But there is one type of saw that anyone can make with very rudimentary tools. That is a turning saw. 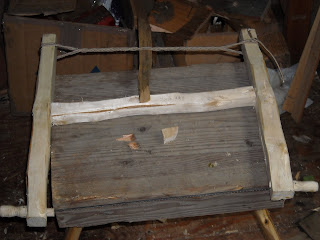 A turning saw dates back many centuries. It is basically a frame for a thin, narrow blade with a thong or rope to tension it, twisted by a stick. It is primarily used for cutting curves in wood, for instance cutting carvings or spoon blanks. It is, in fact, a poor man's bandsaw and that, in fact, is where the blade comes from. At yard sales you can pick up bandsaw blades for a dollar. You don't care if they fit your saw or not. The saw above was made a year or more ago. It works very well but it is too big (40 cm blade) for my small stuff, and in winter, as we all know, we do small stuff here at Chalupy acres. So I need a smaller turning saw. I still had a lot of bandsaw blade left (just as well, as it turns out).

The first job is to make the uprights and the stretcher. 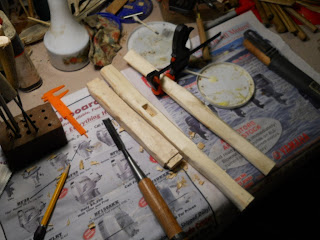 These are birch branches which have been rived to rectangular section, and then planed smooth. In each upright, we cut a square mortise; you can see it in the leftmost upright. This is not cabinetmaking, but the mortises should be at the same distance from the bottom of the upright. In the stretcher, we cut a loosely fitting tenon. You do not want a tight fit because it should pivot a bit when we stretch the blade. To the left, my Japanese dovetail chisel from Lee Valley, beautiful tool, very useful for paring down the tenon to a loose fit. Next job is to do the knobs. The knobs are not handles; they are used to rotate the blade in the frame so's you can cut at strange angles. The blade can turn, you see; that's why they call it a "turning saw." I confess to the use of power tool: 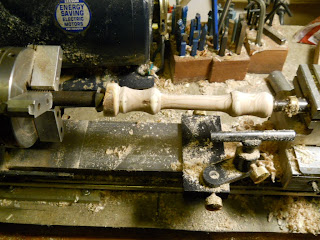 Yes, I could have used the pole lathe. At -25C in the shop, that probably would have frozen me solid, and besides it has a bowl all chucked up in it so no. However, the knobs don't have to be turned. They could be carved, you could use dowels, you could use a rounder plane, -- etcetera. Symmetry is traditional but by no means necessary, as Drew Langsner points out in Country Woodworking.

Then you saw the thing above in half, drill holes in the uprights and attach the blade. This last task is the most difficult part of the whole operation.

First, you saw a slot in the knobs, right on the diameter, all the way down into the handle. Then you drill a very small hole in the handle at right angles to the slot (cross-drilling it is called). Through this hole you will put a pin (brad, in my case) which will go through a corresponding hole in the blade. So you have to drill a teensy hole in the blade.

So you measure carefully and break off your bandsaw blade to the right length. (Run a three-corner file over it to score it, put it in a vise, snap it.). If at this point you tried to drill it you would either break the bit or have it skitter off the blade. The blade is hard. So you have to anneal the blade. Sorry I didn't get pictures of this -- too busy! You take your trusty propane torch and heat 2 cm of the blade ends red hot. Let it cool. Voila, annealed. Now you can drill it. Problem: this particular blade is about 3mm wide. My original brads, 1.7mm. Extreme precision is called for. I didn't do it, and paid the price. The hole in the blade was too big, broke under tension. Tomorrow I will remake the blade (sigh) and this time I will use a very small pin, 1.4mm, which I found in my odds and ends, and my Veritas optical center-punch. But oh well, live and learn. Getting the pin through the hole in the blade requires patience. Bad language is futile. Play it again, Sam, as Bogie did not say in Casablanca.

Here is the collection of turning saws: 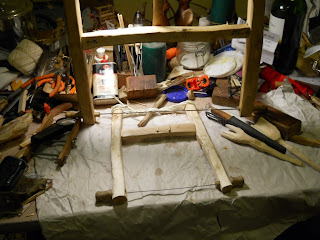 Mr Big you have met; Mr Middle is the current project; and perched on the stretcher of Mr Middle is a very nano saw indeed, 20mm long and barely visible in the small pic. It is one of Woodworker's tools in the Crafts Tableau. It has a real blade, a fretsaw blade 0.7 mm wide (it broke in the line of duty). I had to epoxy the blade in place; no way I can drill in the middle of a 0.7 mm blade -- well, maybe I could, but it would be very, very, difficult. Really a job for a mill/drill. Not sure what I could use to pin it, either; maybe a dressmaker's pin.

I got some use out of Mr Middle before the blade broke. It will be a very useful tool for roughing out carvings, spoons and other curvy stuff.
Posted by JRC at 6:26 PM
Labels: homemade tools, Tiny tools, Turning saw