Wire nut Horse is the oldest Wire Nut project. He dates from September and the onset of the cold season. To complicate matters there are two of them. Let's call them v1.0 and v2.0. It would be useful to show v2.0's complete anatomy before I proceed. 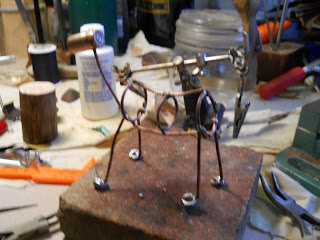 As you can see, v2.0 consists of three rings, a backbone, a neck and a keel -- that would not be found on a real horse, but you need fore-and-aft rigidity. He has a wire neck, cartridge head, and nut hooves. Later he got a saddle and a rider. So how do you make him?

We begin by the three rings. Since I did these horses, I have learned another way to make rings. But I bent them around a former. For this, you anneal your wire -- heat it red hot. Let it cool, or quench it; then it will bend easily. For a while, because copper hardens when you work it. 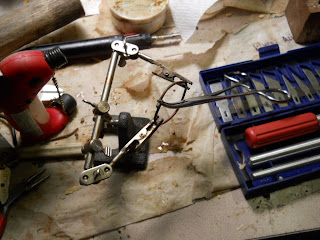 After that picture, I learned to file away spare copper to get a nice smooth ring. You feather the edges. But anyway, you solder it with silver solder. This is hard stuff to master. You have to use a torch; I used a butane torch at left. I also used hemostats as clamps (available, of all places, at your local Wal-Mart as "fly-tying supplies") and the invaluable third hand shown holding the ring. Got it at the "cheap tools tent" which you find all over in the summer, $1.99 and no tax.

So you have three rings. Now we switch to v1.0 -- that's the sad fact of blogs, I didn't take pictures of every step when I should, and we see v1.0 pieces. 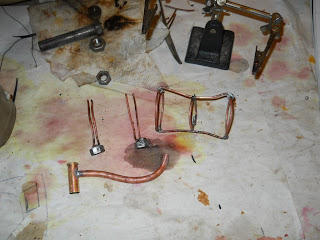 V1.0 is bigger than v2.0; he has copper tubing for a neck and a cartridge head; two legs (double wire) under construction. The torso of the horse is now apparent. Two more legs and we have to solder the beast together. A difficult job. Every time you heat it, the parts that have already been soldered threaten to (and sometimes do) come apart. 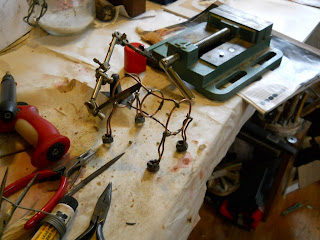 There is v1.0 horse on four legs! a big step, and the rest of him did not come apart in the heating. Now on with the neck! 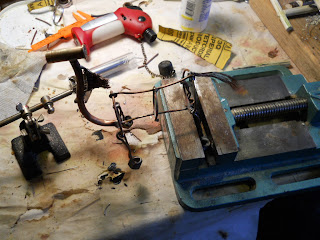 Before soldering, I cut a notch in the neck; soldering needs all the mechanical help it can get. Note also 1.0's elegant tail, a piece of stranded wire I found on my walks.
He also sports a mane, also made out of stranded wire. I used soft solder for this, because the silver stuff kept falling off. 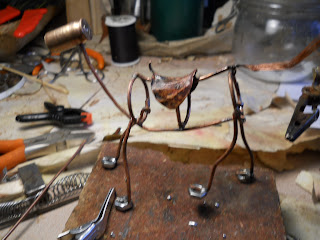 The saddle is a piece of copper sheeting bent (hammered) after annealing. The horn, a piece of wire. Remains the rider, but while I thought I had recorded it, I didn't. It is a stick figure like the rest of the wire nuts. And a nut head, of course.

Maybe the recipient will let me get a shot of it. If not, at least you get the idea. I now know how to make rings wholesale; better late than never. And I learned that it's fun to work copper and brass; a nice change from wood.
Posted by JRC at 6:26 PM
Labels: wire nut horse, Wire Nuts