I am almost afraid to say it. Breakup seems to be here. I walked down Bery road today and beheld the following sight: 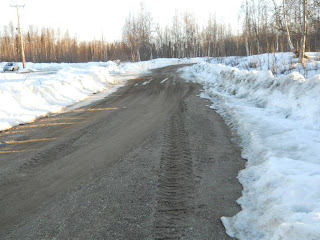 Bare ground! Haven't seen that since last fall. Could it be that breakup is really here? When I went out, the temperature was -5C so everything is frozen. But by 2PM it was +12C! Amazing. You could not really prove it by the state of my driveway, though, as the following image shows. 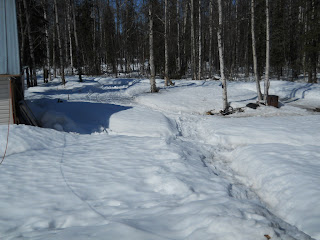 I am an avid thermometer-watcher (also barometer watcher; after all, I am a sometime meteorologist) and I have noticed the dramatic rise in temperature in the afternoon. So, being a trained scientist, I developed an hypothesis. (Those readers who think the "h" should be sounded may read a hypothesis. But Sir Isaac Newton wrote "an hypothesis" and so do I). To wit, my snowblowing troubles might be diminished if I blew snow in the afternoon, say around 2PM. Then the sun would melt the surface layer, and the snowblower would not rise up on its legs and try to ride over the crust. I hate do do strenous things in the afternoon, preferring the early morning for all exertions; but this seemed worth a try. So out came Horatio. To my never-ending surprise, my hypothesis was correct. The scientific method strikes again. I blew out the "loop" -- the place where I get the car headed out the driveway again -- with only minor troubles and no breaking up the crust with a shovel. One more bit of edging to go. Tomorrow's job.

Of course if you wait long enough, Mother Nature will do the job for you. But I like having the driveway clear, and it will clear up a lot faster if it's blown out. Less snow to melt for Ma Nature. Ma is definitely on her own schedule, and we mortals must adapt.

Maybe real soon now I can get back to making screws in wood.
Posted by JRC at 6:39 PM
Labels: breakup, Snowthrower, spring, winter