It has been a hard day. I spent an hour and a half blowing snow and am not much further ahead. It would be great snow for making an igloo. It froze last night, and you can cut blocks from the stuff. But trying to blow it away is another matter. Well, such is life in Alaska; let us return to screw cutting. In this episode we have my adventures in thread chasing. We saw the chases under construction. Look like a saw and a chisel got together. Now, in principle, this is simple. Let's suppose you want to cut an outside thread. So you move the chase along the work so that it scratches the surface of the cylinder that you have previously turned. Ah, but at what speed do you move it? Why, at the speed that gives you the proper pitch. My learned books (and this article) say this takes some practice. It sure does. Very hard to find the right speed. It is fatal to stop or hesitate. It is also hard to cut to the right depth. This is called "striking the thread."

My first attempts at this operation were disastrous. In one morning, I converted half a dozen cylinders into porcupine look-alikes. Nothing even remotely like a thread. Eventually, I got an idea. I took an ordinary lead pencil and used it on the tool rest; and yes, I'm using the Taig. About 30 cm of snow between me and the shop right now. However, this would work on any lathe. In fact it would work better on a pole lathe because it doesen't rotate quite so fast. 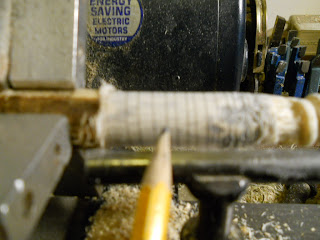 Picture a bit blurry, sorry. But you move the pencil along the rest until you get a uniform pitch -- and the pitch you are looking for, in my case 4mm. When a thread varies in pitch along its way, or crosses over, it is said to be drunk. My first attempts weren't just drunk, they had the D.T.s! But if you, er, munge it up, no problem: take a piece of sandpaper and get rid of the pencil marks. Much better than making porcupines. Eventually I started getting decent pitches: 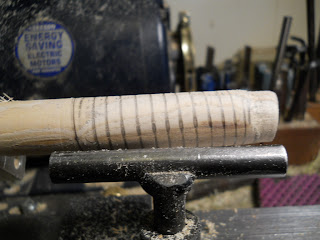 Now we have an idea of the traverse speed. The smaller the pitch the slower the traverse. You can verify this with the pencil trick. A 4mm pitch is really too large, but having filed my chases I must use them! So I turned up a bigger cylinder, did a few "pencil tries" and screwed, so to speak, my courage to the sticking point. Lady MacBeth would be proud of me. 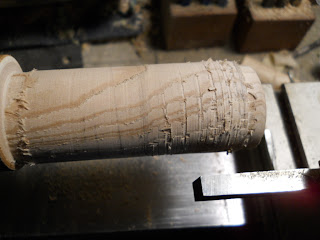 And, by George and Lady MacB. we have struck a thread. The next job is to chase it. One must put the chase in exactly the set of grooves you have stuck, and traverse accordingly. At a 4mm pitch, it is a matter of seconds. I suspect you are looking at an apprentice porcupine. But we persevere. It's fun, too. The depth is crucial. You want to scratch at this point, not cut. Unfortunately at this point the work leaped out of the 4-jaw chuck so I have to recenter it. This is easy on metal but harder on wood, because wood compresses. Moral: when you chuck an irregular piece of wood, label it with the jaw of the lathe. I always label my jaws, but sometimes forget to label the wood with the corresponding jaw. Pole lathe users can disregard this counsel, on account of there are no chucks.

Stay tuned for the further adventures and misadventures of an apprentice screw chaser.
Posted by JRC at 6:38 PM
Labels: screw, screw chasing