Yo ho, up goes the awning

In summer, with no danger of snow, I put up my shop awning. This allows me to work on stuff -- and notably to shave on the shaving horse -- even when it's raining. Right now it's cloudy with showers. Sun comes out now and then. My awning is an evolutionary construct. I have a huge tarp. So the idea is to hang it from the shop front. Trouble is wind, wind. When the wind blows, all previous incarnations of the shop awing came down. So here goes the saga of the shop awning. My son was very helpful, a few years ago: he put in screw eyes into the shop wall. Onto these we tie the tarp. Then we used X-shaped supports to support a beam. On this beam, the tarp. After a great many blowdowns, we have evolved a procedure.

The tripod is one of the most stable stuctures in existence. So we begin by lashing up two tripods. 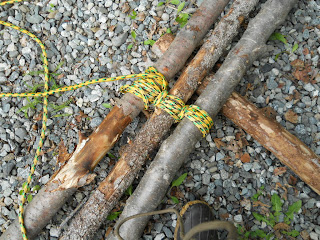 What you see here is called a shear lashing, known to any Boy Scout worth his salt.
I am quite sure you will find detailed directions on the web, but it ain't rocket science. Just weave the cord around the wood, and then you have a tripod. You need two of them. The really difficult part is going into the woods and hauling out pieces long enough for the job. Don't want to cut down anything living. Next step, you need a crosspiece. Also not so easy to find. But I happened to have a 4-meter length of split birch. I used that. 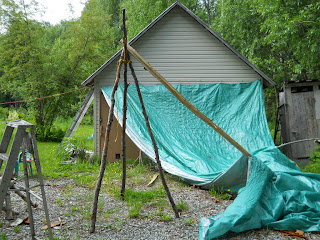 Here is one tripod and the cross-beam laid on it. You will find it wise to drape the tarp over it. Now you erect the other tripod and get the crossbeam on to it. Note the ladder. Very useful, in fact indispensable. Got it at a yard sale for $1.00. Trouble is, when you start raising crossbeam, tripod tends to collapse. Solution is not bad language. Solution is to lower the tripods. Curse all you want. But lower the tripods. This makes them more stable. Eventually you get to this point: 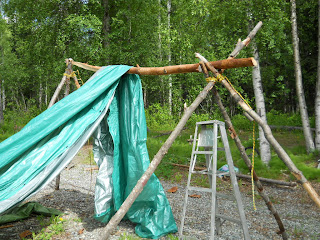 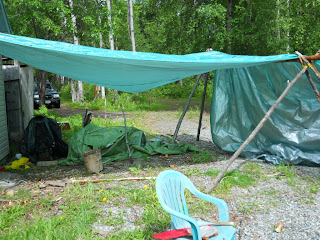 Getting there~ in this kind of construction there will always be gaps and low spots. And yes the left support has to be raised. That is the least of my problems. The real problem is to anchor the right end, as you look at it, of the awning. For this I use a defunct spruce, killed by spruce beetles. I will eventually frame it off, but for now I simply tie the right end to the defunct spruce. 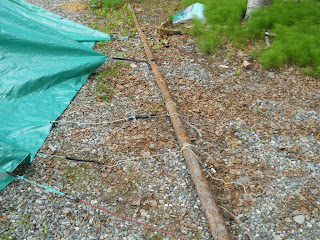 This brings up a very important point of tarp construction. Wind is your enemy. So you have to use flex at one end or another (or both). Above I have used bungee cord, rubber tie-downs, and even a bicycle inner tube. All found items. If it can't flex it will blow down. Be warned. Bungee and blu-tarp, we say in Alaska.

There is more to do but quite enough for today. Stay tuned.
Posted by JRC at 7:13 PM
Labels: awning, shop