Winter has beset us all of a sudden. It usually snows around the first of November, buy this time we got it in spades. First it was a 28cm (by the official snowpole which I stick in the middle of the yard in October) -- an unprecedented snowfall for November. So I blew it out. The good part is that I can now ski, so one gets a reward for each snowfall. And off we went to Anchorage for the weekend. Had to lay in those Costco groceries! Upon returning we found it had snowed in our abscence -- another 30 cm. The snowpole records perhaps 61 cm as of today, but it snowed last night too! So we couldn't get in, much less out, of the driveway. We trudged in and fired up Horatio snowblower. 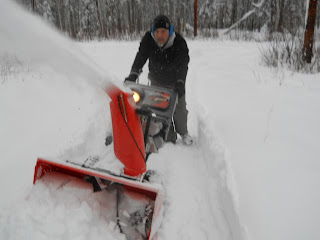 This time -- an unbelievable luxury -- John got to do the dirty work. But life is never simple. If you look at the picture carefully, you will perceive that there is a lot more snow at the left of the feed screw on the left than on the right. When you are on the business end of a snowblower you can't see this. Indeed, the left (as you look at it) side of the snowblower had broken a shear pin. This is a sort of ordinary-looking bolt, calculated to break before you ruin something really important, such as the transmission of the machine. There are two of them, left and right. But without the shear pin, that side of the screw is inert. Not so curiously, it was very difficult to blow snow! In effect we had only half a snowblower. I had this experience before. My driveway is extremely rough; one big stone will do the shear pin in. I probably broke it when I sucked up a the big log I couldn't see. This is not suburbia. Fortunately I had one spare left. So, with some difficulty we replaced it. After that, John blew out the driveway in no time. 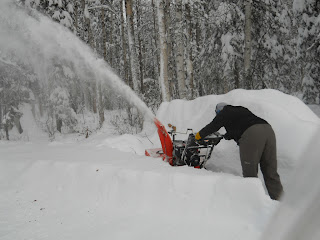 Note the huge plume from Horatio. We had a full snowblower at that point.

But the story does not end happily. It snowed another ohhh 10cm overnight, so we decided to blow out again today. Guess what? We broke another shear pin. I am fresh out of shear pins. I must regard, obviously, shear pins as as an essential winter supply item. Tomorrow I must go into Wasilla anyway, so I must trust to the foresight of Home Despot, er, I mean, Home Depot. If not I must make do with hardware store bolts, but that is really not a good idea. I'd rather rely on a puspose-built shear pin. But happiness is (a) a fire in the stove and (b) a cleared driveway so's you can get out. Remarkable how BMWs do not enter this equation. A beemer may be the terror of the autobahns, but it cannot cope with my driveway. A Unimog, now, might be a different thing; but they cost as much as my house.
Posted by JRC at 6:57 PM
Labels: driveway, Snowthrower, winter