Well, Christmas is over; I can reveal all but one present. But at the moment what I will do is tell you about my totem pole. As I'm sure you know, totem poles are carved in the Northwestern USA (although similar things exist elsewhere, q.g.) They appear to have originated with the Haida tribe (Juneau area) and spread southward, although the anthropologists are really not sure. It is certain that they were being carved, with metal tools, before the Europeans arrived. Where did they get the tools? Again, no one is sure. But carve them they did.

Some totem poles tell a story, e.g. and westernized, "we are the Smith family. here is our totem (for example, the wolf) and here are our accomplishments." Other totem poles are perhaps more abstract, e.g. relating a legend in the native culture. Again westernized, "this is the story of Peter and the Wolf."

So I found a stick in the woodpile. Said I, "hey, thin stick. Might make a totem pole, though. Wonder if I can carve a raven there?" A couple of days later: 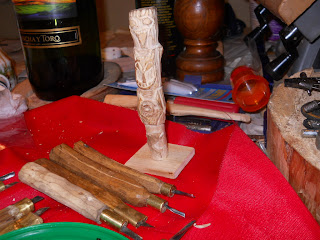 I decided, as I went along, to make it a "true" totem pole. That is, the most common totems in Alaska have a place. Top to bottom, Raven, Bear, Wolf, and Salmon. The whole thing is about 15 cm long. Tools used appear SW of the pole. A 3mm gouge, a 2mm gouge, a very small knife, a somewhat larger knife. All home-forged. And if anyone asks me what my totem is, why I will reply "all of the above, of course!"

The Wolf was once a horrible knot in the stick. I decided to live with it. I made knot into wolf. No Haida carver would do this, of course. But it is an example of making the best of what you have.

When I was in Juneau, I observed several native carvers who did totem poles in their front yards. I regret to inform modernity that the tool of choice is a chainsaw, presumably with a "dime" or "quarter" bar (the size of the nose in US coin) -- these bars are highly desirable when you try chainsaw carving, because they reduce the chance of kickback. Do not try chainsaw carving until you have a couple of hundred hours of ordinary-use chainsaw time in your logbook. It is not a children's game, indeed it is very dangerous. You have been warned, and I have thus complied with innumerable OSHA, EPA, and for all I know FCC and USDA regulations.
Posted by JRC at 7:43 PM
Labels: carving, totem pole