Power outages are a frequent ocurrence in rural Alaska. Usually they are caused by a tree falling across a line somewhere. They are cleared up in two to four hours. So being without power for that time is merely inconvenient. But this last Sunday the power went off from 0530 to 2108, military (24-hour) time; on which I run. If this sounds difficult it is 5:30AM to 9:08PM same day. Almost 16 hours. This is unprecedented in my experience. Chatting with the outage dispatchers I found out that "there were a whole lot of things going wrong" and all of them had to be fixed. Furthermore, the temperature was up to +2C and the winds were howling. Anchorage had 90KPH winds in the Turnagain arm. A miserable day to repair power lines.

Now this is not a prepper blog. Preppers, in case you might not know, are people who prepare for Armageddon. A contraction of "be prepared," the old Boy Scout motto. They stock up on all kinds of stuff for when the big one hits. Not always sure what the big one may be. Might be a hurricane, or an economic disaster (coming soon to your local theater) or riots. Well, having lived in Caracas for a long time, where Armageddon is a frequent ocurrence, I do not need to be sold on preparedness. But this post is much more limited. It is merely concerned with what you have to do to get by in a long power outage. Up to 16 hours, in fact.

Your first requirement is instant light. This is Alaska, remember. The sun comes up at 0930 and is gone by about 1500 this time of year. Flashlights fill the bill. I have lots of flashlights. 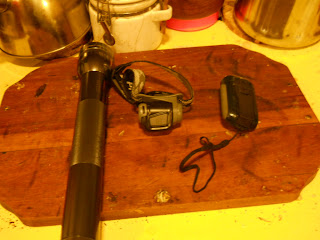 All my new flashlights are LED (Light-Emitting Diode) lights. These are far more efficient than their incandescent brothers. They save battery power. At left, a 3-cell Maglite. This is a searchlight. Ultimate. But next to it is something far more useful. It is a 3-LED light with a headstrap. It leaves your hands free. For cooking, for instance. Or for reading. Both of these require batteries. When the power goes, it is very convenient to have some spares! However, the light at right requires no batteries. You crank it. It shines. Beautiful. This is my favorite flashlight, except for the headstrap one. I have more flashlights. My motto is that you can't have too many. Same thing goes for spare batteries.

However, for the long haul flashlights are not the job. You need something more enduring. Long-term light, in fact. I have a collection of kerosene lamps for this task. 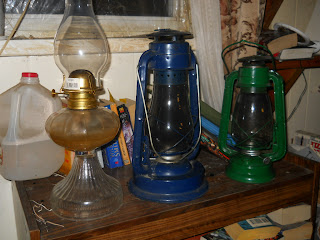 Kerosene lamps are cheap and very useful. But they do not put out huge amounts of light. For that you need a Coleman latern. You also need fuel for it. Some Colemans will run on unleaded gasoline. Good idea. In Europe there is the Petromax lantern. More expensive than a Coleman, which is so ubiquitous in the USA that I do not show a picture of it. But not only will you need fuel for it, you will need mantles as well. Dirt cheap at Wal-Mart, but you do have to remember to buy then while you are there. You will also need some funnels to fill your lampage.
If, like me, you use both kero and Coleman fuel, I would recommend separate funnels for each fuel.

OK, we have disposed of light. We can see where we are. But this is winter, remember? It's cold outside. Soon it will be cold inside too, unless you do something about it. Now here is where I have a big edge, power-outage-wise. I rely on Grumbles, my fuel-oil heater. Grumbles does not require so much as a nanowatt of electricity. (I call him Grumbles because, you see, he grumbles as he runs.) 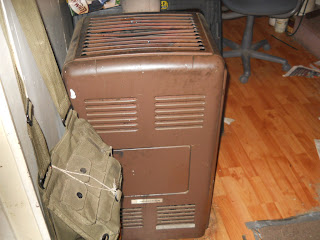 Grumbles was probably hauled across the Atlantic by Leif Ericson. He relies on gravity for feed. Much better than a politician's promises. The "carburetor" (really a flow regulator) is Scandinavian. (Hence my comment on Leif.) But if you don't own a Grumbles brother or cousin, what do you do? For this we have the faithful wood stove. We use it to supplement Grumbles anyway. 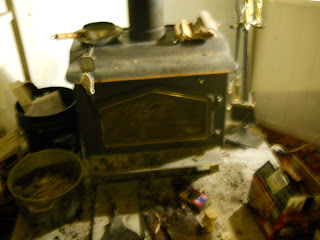 No fire in it. At +2C Grumbles can easily carry the heating load. Turned on low, yet. But, as I said, if you don't have a Grumbles cousin you had better think of a backup.

Next subject is food. Got to eat. Unless you are a fan of MREs (Meals, Ready to Eat, officially; I won't give you the unofficial rendering lest I be accused of political incorrectness) you will have to cook some stuff. Short run, any camping stove will do the job. Really doesen't matter what kind, but remember it, too, runs out of fuel eventually. Get spares. If you don't have a campstove, perhaps you should consider a trip to the nearest sporting goods store. Besides, MREs are fearfully expensive. Even the backpacker's freeze-dried dinners are cheaper, and I consider them outrageous. Fortunately I have a propane stove with pilot lights. No electricity required.

Now we come to a significant subject. Simple, too. Water! If you live in an urban area you may think that water comes out of taps. But this is not so. Water is pumped to your tap. If electricity fails, so will the pumps. In my case it is even worse. My water comes out of well. It is pumped into a pressure tank by an electric pump. And as soon as the power failure occurs, I rely on whatever pressure is built up in the tank. You may think you can overcome pump failure by storing drinking water. You are only partially right. You will certainly want to store oh, 20 liters or so of drinking water. Good idea. But you have to flush the toilets! One flush is five gallons or 20 liters of water down the proverbial drain. When I lived in Caracas water shut-offs were so frequent as to go without mention. So one learned to store water for the purposes of sanitation. It is an awful lot of water. 20 liters three times a day! The Scandinavians, clever people that they are, make toilets that flush with a liter or two. Maybe you should buy one. During your power outage, you should certainly overcome the reflex flushing of toilets. I am sorry to bring up this, er, unsanitary subject but it has to be done. A good old Caracas standby is a plastic garbage can, which will hold about 50 gallons -- 100 liters -- of water. Fill it while the filling is good. But you must store it where it won't freeze. A problem. Not in Caracas, but certainly in Alaska.

In my case, I am investigating putting a hand pump on the well one way or another. I might even be able to put a hand pump in tandem with the electric pump. Menwhile, I store enough water for one (1) flush. And I overcome the flushing reflex, mostly, during power outages. And I keep camper's "sanitary hand rinse" stuff to substitute for handwashing.

These are the trials and tribulations of living without electricity. If you want to rehearse, go to your breaker box or fusebox. Pull the main breaker. Then try to live for the next 16 hours. And remember, you are bypassing the real difficulty: your taps still work. City water flows into your house. It will not, if the power really goes.
Posted by JRC at 7:21 PM
Labels: power outage