Woof, woof! We're off to Nome!

The time of that Great Alaska Institution (GAI) was here last Sunday. The time for the Iditarod race, Anchorage to Nome. "Over 1150 miles." says the blurb on the Iditarod web site, or say 1800 Km. A long way to go by dogpower! So the restart is within walking distance of my house, say a mile and a half or two klicks away. A nice Sunday walk. John and I walked. Driving exposes you to the utter madness of parking, and then getting out of there. We were not the first people there. 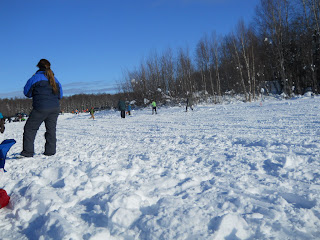 There is a certain festive air about the thing, sort of like an Alaska Woodstock without the hippies. The hippies find it a little too cold for comfort. Temperature? Oh, about -5C at 1400 -- that's 2PM for those challenged by 24-hour systems. 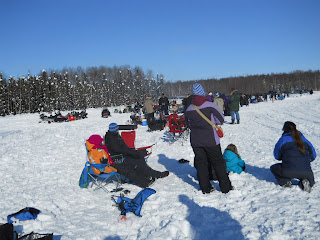 People bring snacks, chairs, tents, and of course the inevitable snow machines. Sometimes it seemed as if there were more snow machines than dogs! The ceremonial start to the race is at Anchorage, the day before. As I understand it the restart is in order of arrival at Wasilla. But Wasilla hasn't enough snow for a decent restart, a victim of the Urban Heat Island effect, or UHI. So the Iditarod has officially moved to Willow as the restart point, much to my benefit.

After about 20-25 minutes after the restart time (1400 hours) the contestants start to appear. Here's the very first to appear: 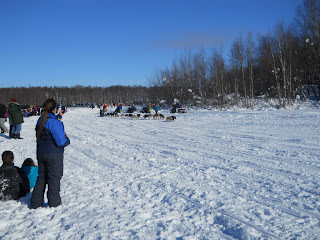 Followed by Number three, with a huge team: 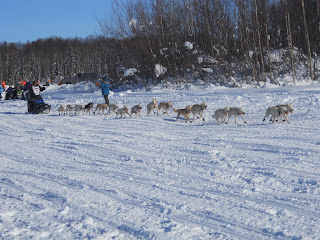 As I count it, he has 8 pairs of dogs. This is a lot more than you need to get to Nome. But attrition is an important factor. There are a number of mandatory stops along the route. At each stop, the dogs are examined by a veterinarian. If the vet says "this dog won't go" the dog goes no further. Do not worry about the dogs; they are flown out to comfort by the "Iditarod Air Force," a bunch of volunteer bush pilots who fly (among othe things) lame dogs out to safety. Pity the musher: out one or more dogs. 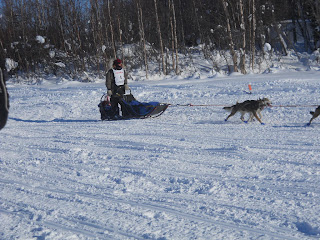 Here is number four. Can't tell the player without a program and I had none. He is also running a huge team, 16-18 dogs. Smart. You might ask, "what's in that sled?" Glad you asked. There is mostly mandatory equipment. Emergency rations. A firearm, in case an enraged moose attacks your dogs. Please do not laugh. it is no joke, out there in the boondocks (from the Tagalog bundok, the wilds). Moose and dogs just do not co-exist. And if your dogs are tromped by moose, then you are out in the bundok with no recourse. Also they must carry some form of stove and sleeping equipment.

John took his video camera with him and got extensive footage. He will edit it, and do a production. When it reaches maturity, I will post it or a link to it, anyway. So stay tuned. Videos of the woofies! Marvels of high-tech. In the meantime, woof!
Posted by JRC at 8:17 PM
Labels: 2012, dogs, Iditarod