The evolution of Polecat

By now you have met (and may be sick of) polecat the bungee lathe. But polecat is really not satisfactory. Remember, he is based on a vise-clamped (UK readers read vice-clamped, although in the US vice refers to an unhygenic habit). The problem with polecat 1.0 was (still is) that I had to drag the workmate under the ceiling hook. Mind you, we have achieved our original objective, which was to turn tool handles in a vise-clamped bungee lathe. But evolution is relentless. Nowadays we do not want to drag the workmate under the ceiling hook. So once on Bodger's forum there was a picture of a different lathe. I can't remember where it is. But I do remember the principle. It had a long upright and a lever off of that, and the bungee tensioned the lever. 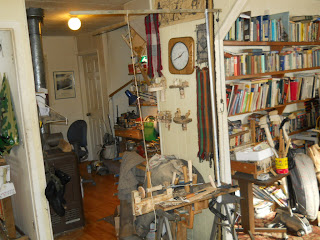 So, since uprights in the winter are hard to find -- I would have to wade throough 1.70 meters of snow to find one -- I used a broken ski pole and a found wooden strip, about 10mm wide by a meter plus by about 4mm thick. A notch was cut in the ski pole to allow the strip to pivot. A finishing nail is the pivot pin.

This actually worked, up to a point. But as you can see above, I used the ski pole handle as a clamping point. Not too good. Tends to slip too much. Next day, I took the handle off and stuck it with glue into a piece of 2x4. Much improved, although you can't see it in the picture that follows because stuff is in the way. 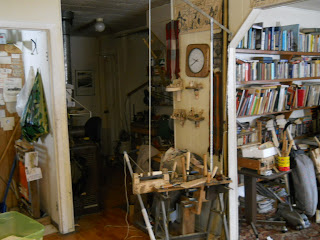 You see how it works, I am sure. The bungee is connected to the long stip (the lever) at the right end of the picture. The strip is quite long, say a meter and a half. The pivot is the same, a finishing nail. The treadle is connected to the cord, which wraps around the workpiece. I can adjust the tension of the bungee by a tautline hitch in parachute cord on the bungee, in turn attached to said parachute cord. At the other end, cord connects to faithful mop-handle treadle, described in a previous post. As you see from the picture, I am on my way to yet another tool handle.

Not all the bugs are out of polecat 1.1. For one thing the treadle, inner tube rubber or no, tends to wander. For that matter the workmate itself tends to rotate. When it had a thirty-kilo bandsaw on top of it, this was not a problem. I see sandbags in my future. Perhaps kitty litter would do it. As Sir Isaac Newton would certainly have said, I need more mass. Stay tuned. Also, I have a plethora of tools handles. Time to turn something new. Again, stay tuned.
Posted by JRC at 7:48 PM
Labels: mini pole lathe, pole lathe