On Saturday last week it started to snow. I came out Sunday morning and beheld the ensuing mess from my front porch. 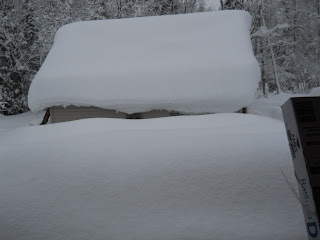 Now most of this mess is due to snow sliding off the roofs. This forms an enormous snowbank. If you look carefully at the above picture, you will see two separate banks. One is caused by snow sliding off the house roof. That is the one immediately ion front of you. Further back, snow has come off the shop roof; that is the second snowbank. It is almost as high as the shop eave!

There is a more pressing problem, however. It is getting out of here! Looking out to my car, we are presented with the following problem: 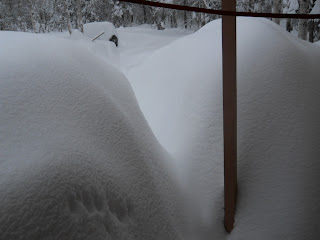 Viz., and to wit, we can't get out of the house without wading er, waist-deep in snow. Wouldn't want to use vulgarity in this blog. So we have to do something about it. In the previous image you can just see the car, faithful Vicky, buried up to her, er, armpits in snow. A closer-up(thanks, zoom lens) may be interesting. 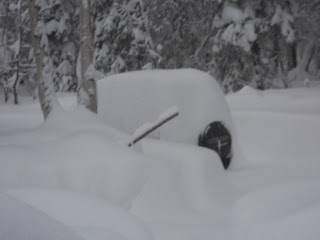 Now how much snow is this? And how do we get out of it? Let me give you a clue. A snowblower can accomplish wonders. But the only way off my porch is with a shovel. Snowblower can't deal with the hills. It just rides up and gets stuck. And I have the biggest snowblower Home Depot could supply, and in retrospect maybe I should have gotten it tracked, not wheeled. Hindsight is wonderful. So shovel I did. I was throwing the stuff almost two meters over my head. Exhausting.

Now, as to how much snow: when it was all over I dug my way down to the packed stuff. I got 40 cm of new snow. Now I understand very well that by some standards this ain't much. East coast gets 60 cm to 1m regularly. But on the East coast the stuff melts! But iin Alaska it is here till breakup! Well, 40cm is a foot and some for RGU fanatics. 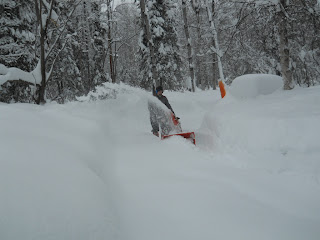 Glad I didn't have to do it myself! So at the end of the day we were OK. Our porch is a little snowed in. But we can get into the house (and out, just as important). 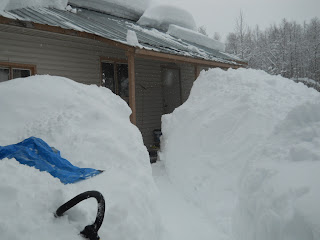 The handle of our faithful shovel visible in the foreground. This, however, is not the end of the story. Today John got stuck trying to back in to the driveway. So we tried my faithful come-along. Broke the come-along! The ratchets would not hold! Cheap asiatic come-along. But it got me out of many a tight spot. I regret its passing. New come-along in the future. However, by digging and more hard work, John came unstuck. So we can get out if we have to.

Ah, the perils of bush Alaska. But if you don't like to deal with these problems, you probably would be much happier elsewhere.
Meanwhile we can enjoy a fire.