You have no idea how relieved I am to be posting this. I am having computer problems. I'm doing this on a laptop. I hate laptops. But if I go off on this subject I will be here all night. On with the show.

An Inkle loom is a device for weaving long narrow pieces -- belts, straps, or runners. My father made one and used it to make belts. I learned out of Inkle Weaving by Helen Bress, but there are others, q.g. An Inkle loom is an extremely simple piece of gear. 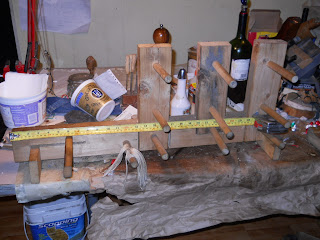 This particular loom is about about a meter and a half long, but this is totally unnecessary for most work. About 60 cm will do you for most purposes. For the purposes of this discussion you can forget everything to the right of the second upright 2x4. As you can see, it is all 2x4s and dowels, or pegs. There are three indispensable pegs. Two of them are marked "H" and "O" in the pic. The other one has a bunch of strings dangling from it. It is called the heddle peg, and the loops of string are called heddles. The other pegs are there to make long pieces. At the left is the tensioning arrangement. It is a piece of wood with a bolt screwed into it, and a nut, out of sight. It allows you to tension the weaving properly. Tying up the loops of string, or heddles, is a major nuisance but you do it only once.

You do not have to be a cabinetmaker to build this thing. Just a 2x4, a drill, a saw and some dowels. The dimensions are really immaterial. Only moderately difficult thing is cutting a long slot in the horizontal 2x4. Drill some holes and cut out the intervening material with a keyhole saw (which I did) or if you have a router, why just rout the slot.

OK, Houston, we have a loom. Now, how to use it? You could consult the internet, or read a book (which I advise) but here's weaving 050 -- remedial level. In weaving, there are long threads and cross-threads. The long threads are called warps. The cross-thread is called the weft. The first job in Inkle weaving, is to warp your loom, i.e. tie on the warp threads. This is straightforward -- in fact trivial -- but it is really tedious. Here's the start on the warping procedure. 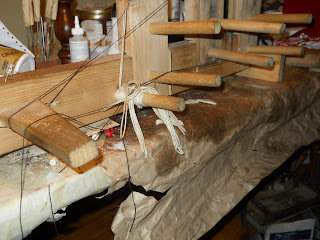 There are two warps in this drama. The leftmost goes through the heddle. It then goes up to the heddle peg, the one marked "H" in the first pic, and around enough pegs for the length you are expecting to weave. The next warp goes direct to the peg marked "O" for open, and back again to the tensioner. I made a dreadful mistake when I did this warp. The warp, on its return, must pass under the heddle peg. I had to do this all over again. Eventually I got it right. Now I haven't told you how to weave. Coming soon, but meanwhile, the product in progress. 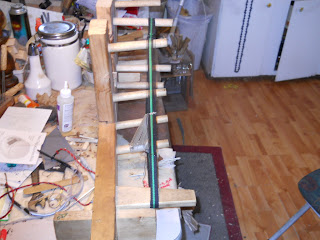 We are weaving a strap for the cell phone case we posted earlier. Stay tuned.
Posted by JRC at 7:11 PM
Labels: Inkle Loom