Of all the machines known to man, a pole lathe has to be one of the oldest. Technically a pole lathe is a reciprocating lathe. It consists of a bed of some kind, two uprights called poppets, and a pair of (nowadays) steel centers. The workpiece is put between the poppets, on the centers. A cord is wound around the workpiece, attached, originally to a long springy pole. To the other end of the cord, we attach some kind of pedal or treadle. You push down on the treadle. The workpiece rotates. You relax foot pressure on treadle. The springpole (in my case, merely a bungee cord) makes the lathe rotate backwards. You do not cut while it does so. Here is a picture of my bigger pole lathe. 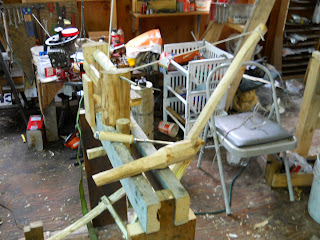 Some time ago, a year or so past. I attempted to make an indoor pole lathe. The idea was that it would clamp into a workmate. The workmate is the greatest British invention since the steam locomotive, and its inventor is deservedly very rich. 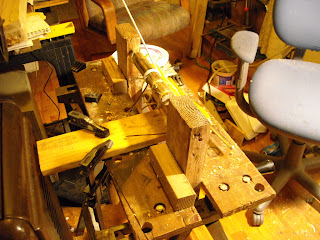 Alas, this did not work. The main reason for failure was that all the struts and assorted junk in the workmate interfered with the treadle.

Well, as readers of this blog know, I practically live over in Bodger's forum, a place devoted to greenwood woodworking. There was a recent post there on somebody who was interested in a small "pole" lathe that would go into the end vise of a carpenter's workbench. Inspired by this post, I decided to make a small bungee-lathe that would clamp in a vise. It would be long enough to do tool handles, no more, since that was the purpose of the post above. So I dug through my box of odds and ends and came up with a 2x4 offcut found somewhere, and a survey stake ditto, 2x2.

Now a pole (or for that matter the most expensive CNC-capable lathe on the market) has two poppets. In modern parlance these are called stocks. The headstock, which sits to your left as you face the lathe, is fixed. The right-side poppet is the tailstock and it can move back and forth somehow, to accomodate variable-length workpieces. So out of the 2x4 I made the bed of the lathe. Out of a piece of 2x2 I made a tailstock. adstock. I cut a slot in the bed to accomodate the tailstock. Easy way to do this is to drill a hole and then rip down with my trusty ryoba saw. You need to be very, very, careful to rip in a straight line. Here are the first two pieces: 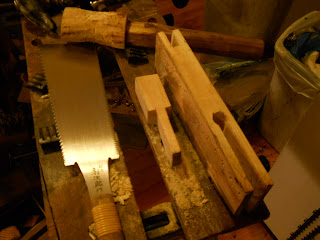 There's the bed and the tailstock. Notice that the tail on the tailstock is quite long. Why? Later. Then we make a headstock out of the 2x2. 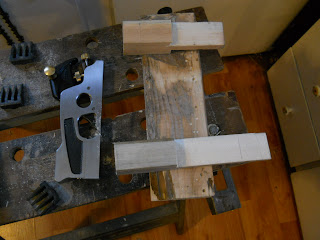 Later we will dowel this thing in place. No glue for us bodgers. Next thing is to make up some sort of tool rest. A tool rest allows you to, er, rest your tools on it while you turn. I carefully cut some thin slots in the remaining 2x2 and screwed them into the lathe. For the actual tool rest I used a piece of hardware store steel, about 3mm x 30 cm, cut off with a hacksaw.

Next order of affairs is to make the centers that support (indeed dig into) the workpiece as it is turned. So I had some steel rod. Classically, the points should have a 60 degree angle on them. So I made me a 60 deg template, put some 3/8 (about 3mm) rod in the Taig lathe and filed to shape. As the lathe turns -- there was a soap opera to this theme long ago. I don't own a compound slide for the Taig. The tailstock center came out of some ditto threaded rod I happened to have. The dimensions of these centers is totally non-critical. Anywhere from 4 to 8 mm. So now I had some kind of lathe. I clamped it in a vise, got out a gouge, spun the thing by hand, and let's see what happened. 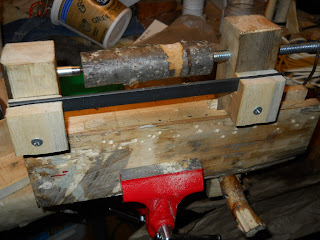 Very encouraging. The reason you want a screw on the tailstock, by the way, is that you have to adjust it as you turn. I wound up tapping the hole in the tailstock with a metal tap! Now we have to arrange the "pole" part of this thing, i.e. the return mechanism. I will leave this for episode II.
i
Now you see why the tailstock is so long. There is a hole drilled through it and a peg is jammed into it. This keeps the tailstock from going off down the slot.

Next episode, we actually turn something with thls contraption.
Posted by JRC at 7:52 PM
Labels: mini pole lathe, pole lathe