[Finally straightened out this post. I plead extenuating circumstances.]

Google sometimes seems like a diabolical organization. I have spent a whole lifetime dealing with computers. Dear Google, would you please stop trying to help me? I am tired of your "outdated browser" messages. That's a rant for another day. Let us return to something more interesting, like Inkle looms. In my last post I described an Inkle loom,and showd the starting of the warping process. Here we learn how to weave on an Inle loom. To begin, you need a pattern, found in any Inkle loom book and probably all over the internet. So here's an Inkle loom all warped up. 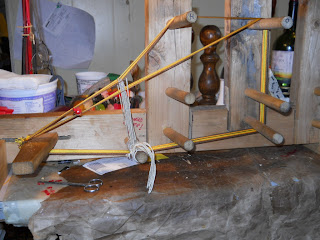 It is really very simple. You alternate heddle (the string loops) which go to the H peg in the pic, and open strings, which go to the peg marked O. Notice that in the picture, there is a triangular space between the tension peg and the the heddles. That is called a shed in weaverspeak. All looms have at least two sheds. You could call them left-to right and right-to left, or even A and B. However, the inkler's terminology is something like Heddle and Open sheds. What you see above is the heddle shed. We need to show you the open shed, and this you make with your hand, like this: 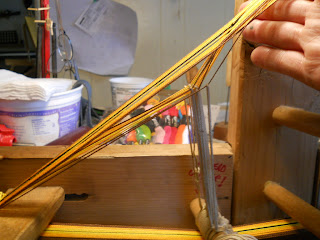 Notice that the warps that were formerly "up" are now down. All I did was push up on the threads that go to the O (for Open) peg. Now we are ready to weave. But first, you need a couple of appliances. 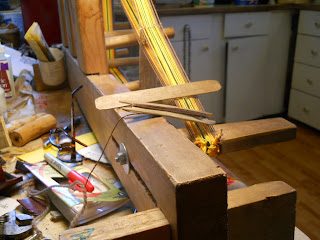 Above you see the business end of the loom, the one the weaver sees. You can see the tension nut and its washer. Loosening the nut allows you to move the tension bar back and forth, setting the tension of the warp. On top are two gizmos. One is the shuttle, which is wound up with thread of the same color as the border of the warp (brown, in this case). The other I call the popsicle stick. I suspect weaver-ese is a beater. It looks exactly like a popsicle stick, but I made it myself out of birch. You lose no points for using an actual popsicle stick. I use it for beating (tell you what that means in a minute) and holding sheds open in the face of collapse. OK, we are ready to weave. Decide which way you want to go. I always go left-to-right on the heddle shed. These directions can be reversed, left for right and heddle for open. So I have the heddle shed. Now pass the shuttle through the (heddle) shed, left to right as you face the business end of the loom: 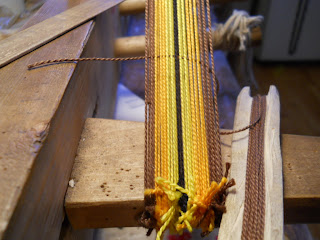 This is known as "making a shot." Now, make the open shed by pushing up with your hand, see above. Go back with the shuttle in the opposite direction, right-to left. 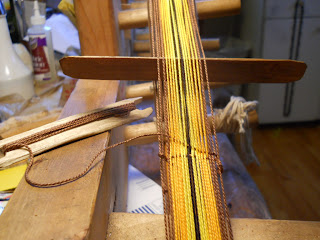 Now you have to "beat down" the threads. For this, I use the popsicle stick. What you do with it is to push on the shot you just took until it lies as close as you can get it to the previous shot. Picture a little fuzzy; pressed shutter too soon, not about to do whole strap over again! 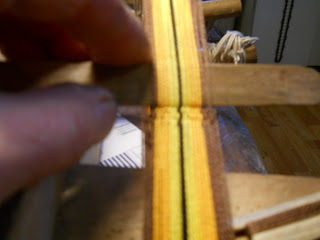 And that is all there is to it. Make a shed. Pass shuttle through. Beat down. Make the opposite shed... ad nauseam. There are some caveats. Sometimes the warps will decide to stick together and not go to their proper place. Looking at the loom sideways you can detect these evil threads and push them to their rightful place. After a few shots, you have built up a few centimeters of weave. 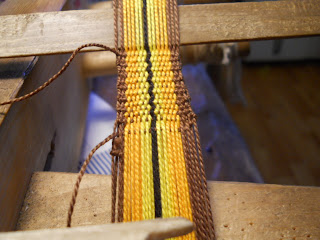 So you just keep going until the belt is a as long as you want. You can weave all the way up to the heddles. I seldom do. When you have gone some ways, simply pull the weaving back towards you. The warps just slide around the pegs. Might have to relax the tension to get away with this. Tension is a difficult thing to gauge, you have to experiment. Depends on the thread material. When you start out, my advice is to use synthetics. They take a lot of abuse and have bright colors. Just the thing for learning. They don't stick the way other materials do.

This post has been, as they say in Latin, a via crucis. I could rant on laptop keyboards. But I won't, and wish you happy inkling.
Posted by JRC at 8:43 PM
Labels: lar