For those of you who might be wondering about the title of this post, a word of explanation. Actually a whole paragraph.

Roger Welsch is an author who lives in Nebraska. At one time he was a regular on CBS Sunday show, AKA "the fat guy in overalls," his words and not mine. His real passion is old tractors. Since old tractors are also a hobby of mine, although not quite as intense as Roger's, we share a mutual interest. You can Google him easily. But the point is, Roger uses the word "rustoration" because he restores old rusty tractors. In my context I will borrow his word to denote the restoring of old tools.

All this began when I stumbled across a reference in a British blog, all about restoring old drill bits and braces. I happen to have a large collection of old drill bits, all of them in deplorable condition, at least for actually drilling holes. A collector would be outraged by my proceedings. Collectors, however , seldom drill holes with their bits. They put them in glass cases. Fie on that. I need to drill holes, and there is no room at Chalupy for glass cases. So I set out to restore the bits. Mr British recommended citric acid, readily available in Britain (not so much in the USA), plus methylated spirits (denatured alcohol to us yankees) plus dish detergent, known in the Isles as "washing-up liquid"). Hmm, said I. A weak acid. What do I have that is a weak acid? Why, vinegar of course. So I made a tray off of the bottom of of a laundry detergent jug, filled it with vinegar, and off I went. I left the bit in the vinegar for four days. I may not have citric acid, but I do have patience. The bit emerged much, much cleaner than before. I am sorry I did not take a picture of the original state. Color it old and rusty. 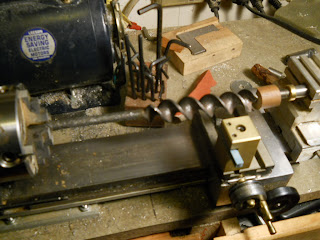 As you can see, the bit has changed color from very dark brown to something that looks like metal. Here it is, chucked into the Taig for further cleaning. I used the four-jaw chuck because it is impossible to chuck a four-sided object in a three-jaw chuck. The four-jaw is a very good chuck indeed, but it is a pain to set it up. The three-jaw Taig chuck is exasperating, but it self-centers. Sort of. Note my improvised cup center at the right. It is a piece of wood drilled through and cinched up in the tailstock. It holds the leadscrew, obviously impossible with a conical center. An application of sandpaper (the Willow hardware store does not sell emery paper, which would have been much better) the thing cleaned up quite nicely. It is badly pitted. On the pyramid that fits the chuck, we found the number "15," meaning that it is 15/16 inch or about 22mm. Old Gringo auger bits are numbered 4 to 16. The number indicates 1/16s of one inch, about 3mm.

Again, no "after" pic. I wasn't sure it would work. But encouraged by my success, I braved my way out to the shop and collected all my rusty old bits. I bought them for at most a buck apiece. Fresh vinegar and splosh! In they go. 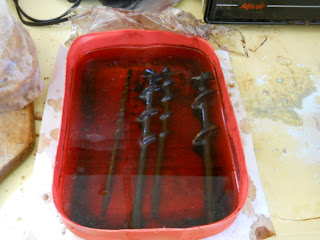 Above is my ex-laundry detergent tray, filled with vinegar. Do use distilled vinegar for this gig; save your wine vinegar for salads. They had marinated about four hours when I took the picture. Be patient. As with other marinades, good things take time. Vinegar is really cheap. After about five days, the vinegar had turned black. Time to unmarinade. The bits looked amazingly like steel. 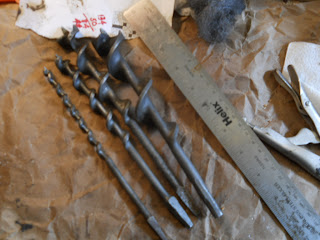 A bit of work with sandpaper and steel wool, and they are as good as new. Well, not quite. They have to be sharpened. The link will tell you how. The last step in the process is to spray the bits with Teflon lubricant.

There are alternatives to this process. You could use battery acid, which is sulphuric acid diluted, or hydrochoric acid. These are much faster than vinegar. Overnight, in fact. But they are nasty substances, and you have to dispose of them properly. When you live on the north end of a southbound septic tank, as I do, it is highly unadvisable to dump acids down the same. Poison. There is also electrolysis. I may post on this someday. For now I wil stick to vinegar.
Posted by JRC at 8:13 PM
Labels: old tools, restoration, rustoration