This is a long overdue post. It begins with the fact that I got all wound up over carving after reading Chris Pye's book, Wood Carving, which you may google. Then this morphed into a project of John's, namely making custom picture frames for his paintings. My job is making the frame. Now you may go to the Home Despot and buy commercial moldings and make your frames out of that if you wish. But I soon realized that I would have to make the moldings myself. And I refuse to use a router. So it's back to basics. Let us build shaped planes and use them to shape the moldings on which we will do carvings, out of which we will build frames! Really unwinding the Industrial Revolution.

Back in the pre-router days, people used planes to make moldings. They had all kinds of elaborate shapes. I wanted to start simply. So I decided to make a hollow and a round. One cuts a hollow, the other makes a round out of a raised piece. Now I have made some miniature planes but this is real stuff. Tough. First, you have to make a blade. The blade is the crucial part of the plane. I used an old rusty crosscut saw for the purpose. In retrospect it was much too flimsy. But hindsight is wonderful.

I started out with the rounder. This is a concave blade, an upside-down U.
First problem is to find your raw material. Maybe a circular saw blade. I used a handsaw blade, but I think a circualr saw blade would be better. I cut it roughly to shape, with a hacksaw, and I started out with full metalworking equipment, the milling attachment on the Taig. At least I got the bottom of the thing milled out flat. 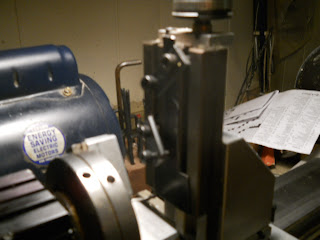 But there was no way I could cut a semicircle with the mill. I do not have a rotary table! Nor yet a cutter of exactly the proper radius. So, when you have to cut shapes out of metal, you resort to drilling: 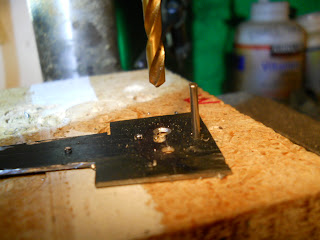 Since I am drilling a semicircle, I stuck a steel pin in the backing board at the proper radius. It fits into a hole in the proper point of the proto-blade. This, at least, ensures you are drilling on the radius of a circle. Do not move the backing board. Clamp it, preferably. You are trying to drill overlapping holes. Then cut off any webs and clean it up with files. At this point I decided to give it a preliminary grind, as I usually do with my hand-made tools. 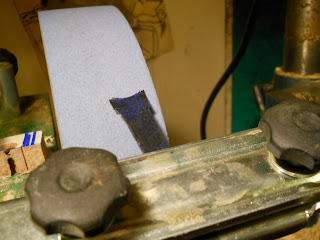 Terrible mistake. You should not use a flat grinder to sharpen a curved tool. I do not know how Tormek & Co. do this, but their grinder just ground me flat! I ruined the blade.

So I took a deep breath, said some unseemly things in several languages, and decided to make a hollowing plane instead. U-shaped. The iron for this was made exactly the same way as the previous one, but when it came time to grind, I rotated the blade. I made a jig for the purpose. I also use the jig to sharpen gouges. Don't have a picture of this (yet) but it's just like sharpening a gouge, only the blade is flat. At last a nice edge. So I hardened and tempered. I will soon post something on this. And I had a semicircular plane iron, only shaped U instead of upside-down U.

So now we have to make a body for the plane. We are making the Krenov plane style. It is a laminated thing, you saw off the middle and glue it back again. I have been here before and will not repeat it. But here are the pieces of the plane. 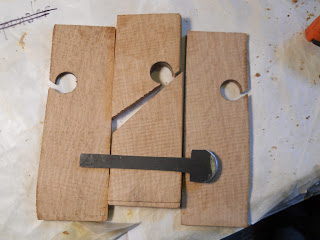 Here we have the iron, the sawn-put cheeks, and the middle part, sized to take the iron. We have simply drilled a hole to let the chips escape. The middle part is shaped for a wedge, to hold the iron in. For the record the dimensions are 145 x 50 x 23 mm. The 23 mm is a curious number, it must be something in inches, but I don't do inches.

Observant readers will note a terrible mistake. I did not drill registration pin holes when I sawed it apart. I paid very dearly for this mistake. Almost as bad was the fact that I did not draw layout lines on the outside of the body. When it came time to cut the throat opening of the plane, I cut my own throat. So put down layout lines on the outside -- it saves infinite trouble. You must cut the throat at the smae angle as the bedding angle (45 deg) . In the end (OK, confession is good for the soul) I used plastic wood to remedy my mistakes. Here half a millimeter is crucial. No big deal to cut the throat; but cutting at the proper angle is another matter. You want a very, veye, narrow throat on these things. It has to shave, and the throat opening roughly equals the thickness of the shaving you will take.

Now on to the rounder. I cut a block of wood exactly like the previous one. I remade the blade. It is still in a rough stage. But the curvature is right. Exactly the same radius as the hollow. So now we can use the hollow to shape the rounder. 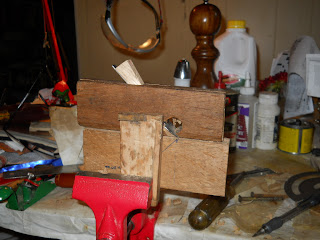 Note the plastic wood infill on the hollow. But it works. It planes. It is not as smooth as I would wish. I need a fence to keep the hollow straight. It needs a thicker iron. But it planed down the sole of the hollow. 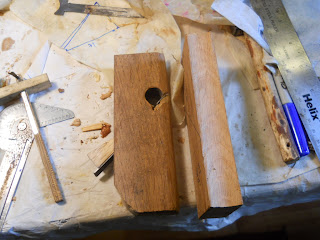 I used a circular rasp at the end, and sandpaper wrapped around a piece of pipe at the end. But the rounder has a nice shape. A few flaws. They are correctable. This time I remembered to drill registration holes. Oh yes, andI have sawed the back end of the hollower to a curve. Else it digs into your hand. Live & learn.

It is time to saw the thing apart. I can hardly wait to make an ogee, q.g. If circles cause all this much toil, I wonder how I will do the ogee. Stay tuned.