Handy Bandy gets a frame

Of all tasks in metalworking, cutting off metal so you can work it, using a hacksaw, is by far the most tedious and exhausting. So... is there a better way? Well, there is an angle grinder. But this is wasteful, noisy, and also hard to hold.

You may remember my portable bandsaw. I bought it really cheap at a pawn shop. As far as I can tell, it was brand new. But it is a difficult tool to hold by hand. I called it Handy Bandy; I thought I would use it for timber framing. But it is much too difficult to hold by hand. So I thought I would build a stand for it. Thus it would become a cutoff saw.

There are literally hundreds of such stands on the net. But most of them require welding. I can't do that. But one design was build mostly from wood; it came with instructions and photos. As it turns out a lot of the stuff is wrong or outdated. Never mind. The point that you must bear in mind is that Handy's blade is tilted 45 deg from the vertical. Why? I don't know. Maybe they thought  it was easier to start the cut. But what I want is a cutoff saw. So I have to tilt the saw 45 deg off the vertical.

The key of the design I followed is to build a bracket and some clamps that tip Handy over 45 deg. This involves bending a piece of steel strap to very precise dimensions. In order to do this, grooves are milled in the strap. On my micromill this is not easy (especially because I broke my 1mm cutter) but it can be done. The grooves cause the metal to bend where you want it. 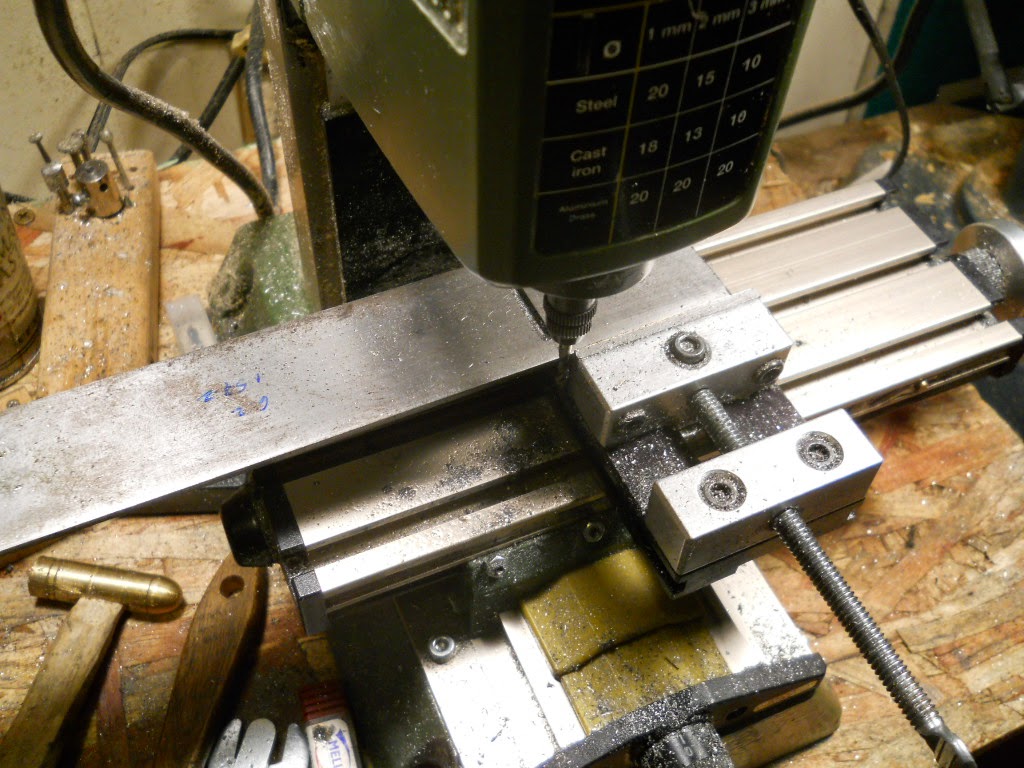 The next job is to heat the metal up and bend it. I used two propane torches. The 90 deg bend is easy The other two are at 45 deg from the vertical. They are harder. But crucial. When the bend is complete the bracket looks like this: 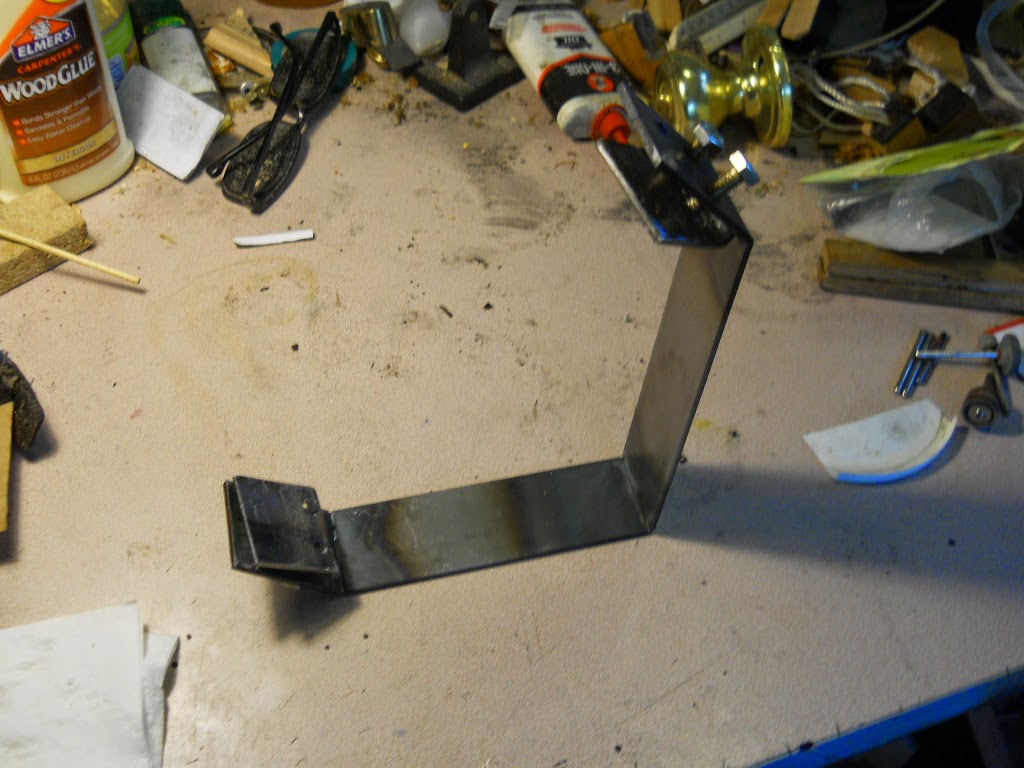 Now we build a block of wood to get the bandsaw up high, so it can pivot. An ordinary hinge is used to get the pivot. Even without the hinge, you can see Mr Bandy is now tipped over 45 deg. And I have not discussed the clamps, I omitted to get pictures of the process; which involved a whole lot of hacksawing! 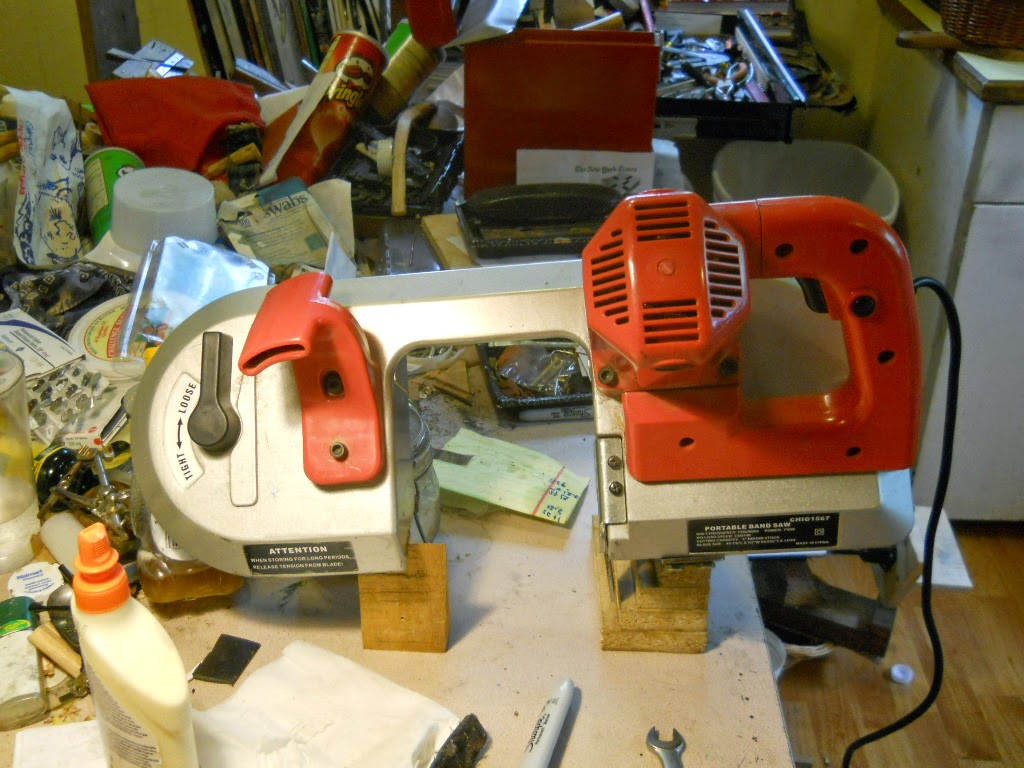 So now we build up a wooden block to hold Handy off the base (which we cut out of particle board). Observe the hinge. We bolt one leaf down to the block; the other is bolted on to the bracket. There's the pivot. 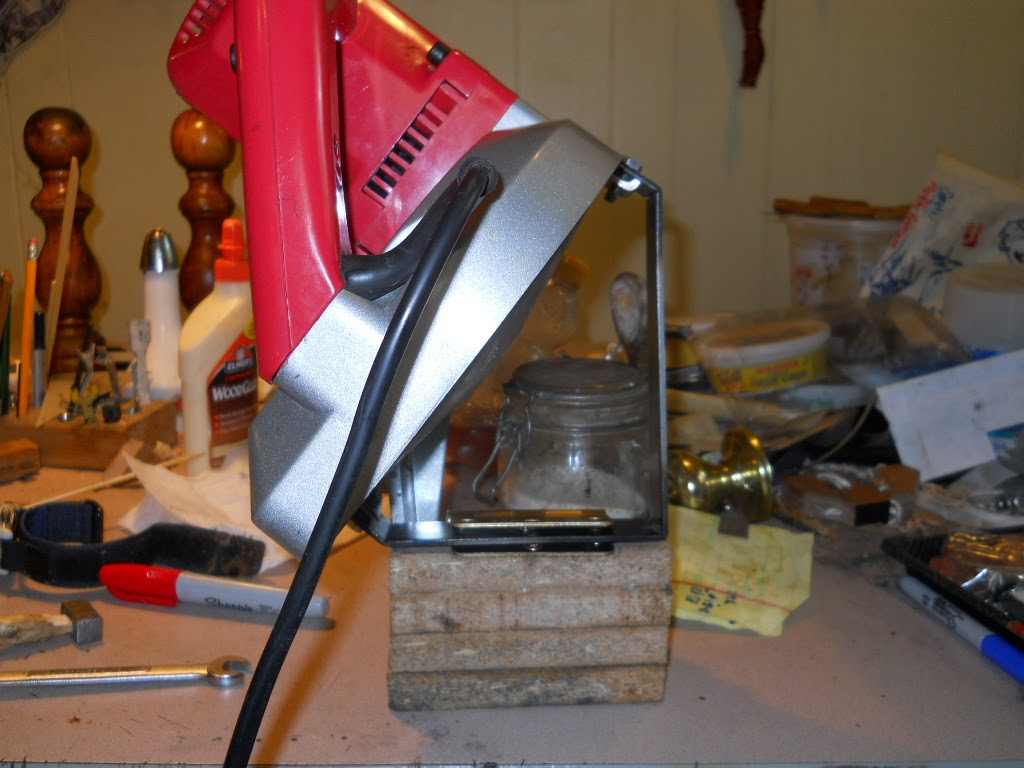 Next step, we build up another block to hold the bandsaw vise. Which I don't have. Nor have I bolted anything down to the stand. So I clamped up a lashup to try to cut aluminum. Astute observers will notice I am doing something wrong. 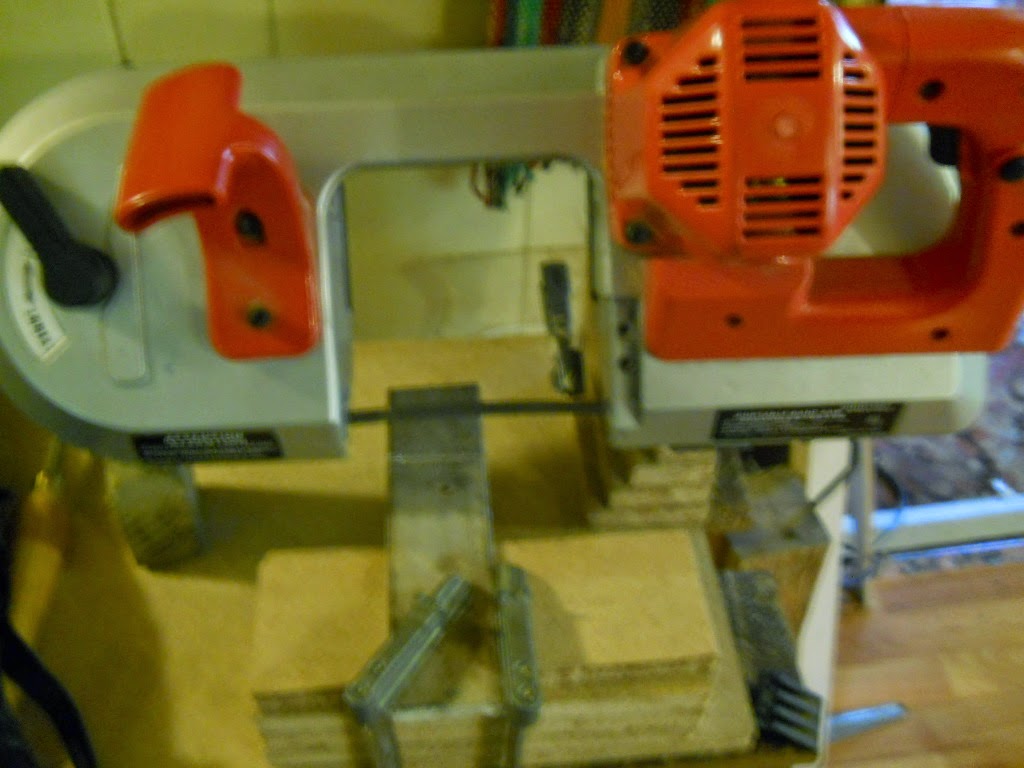 Nevertheless it cut off a piece of aluminum (very tough stuff, this particulat piece)
in much, much less time than I could do it with a hacksaw. Note that I have removed the fence from the bandsaw. 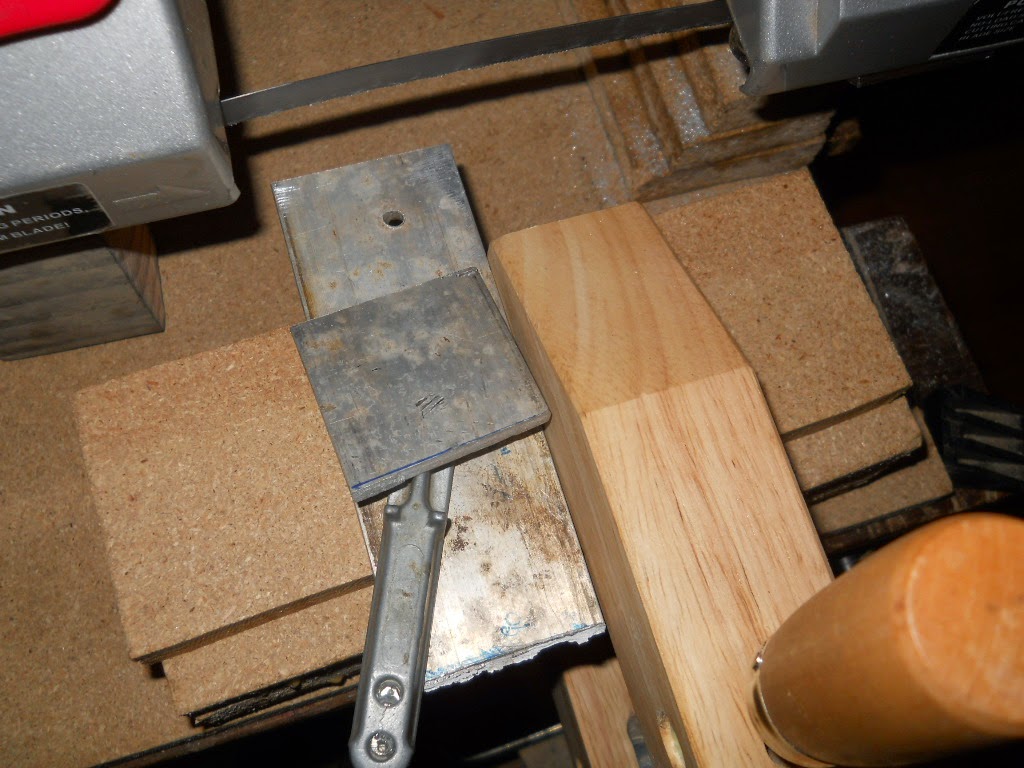 When I did a piece of steel it almost got there but at last minute it twisted and broke the blade. It dawned on me then that I am cutting at the wrong end! I should have been at the right end, close to the primitive fence on this bandsaw; in fact I should have put the fence back on! Then the blade will pull the work into the fence and keep it from swiveling.  However, this is very promising.

I have not included a link to the original writeup. Partly because a lot of it is not right. If you search for "portable bandsaw stands" you will find it.  However I spent a lot of today (raining heavily) in reformations. More to come.
Posted by JRC at 8:57 PM
Labels: bandsaw frames, bandsaw. portable bandsaw