My camera has gone west. I have used Nikon cameras for a long time, ever since I bought my first SLR (remember those?) long ago. My first camera was a Rolleiflex. After that I bought Nikons. Used, of course. Even used they were better than the -- well, let us not mention brands. I had an F-1 and an F-2 -- but again let us not get sidetracked.

So in this age of digital photography I have bought two Nikon "Coolpix" cameras. I have gotten used to them. But alas, they lack vigor. I dropped my camera on a rug -- not a hard floor -- and the little latch that holds the battery in its place broke. The latch is tinware and plastic. It broke. So my camera is literally Scotch-taped together. This is why pictures will be very limited in this post. BTW, neither duct tape nor electrical tape will work to keep the batteries in place. Too stretchy, loses contact.

The real purpose of this post is to document progress on the bandsaw frame for Handy Bandy. John pointed out to me that I had the hinge and the bracket reversed, so the frame would not swivel 90 deg or more. So I did that, and now... 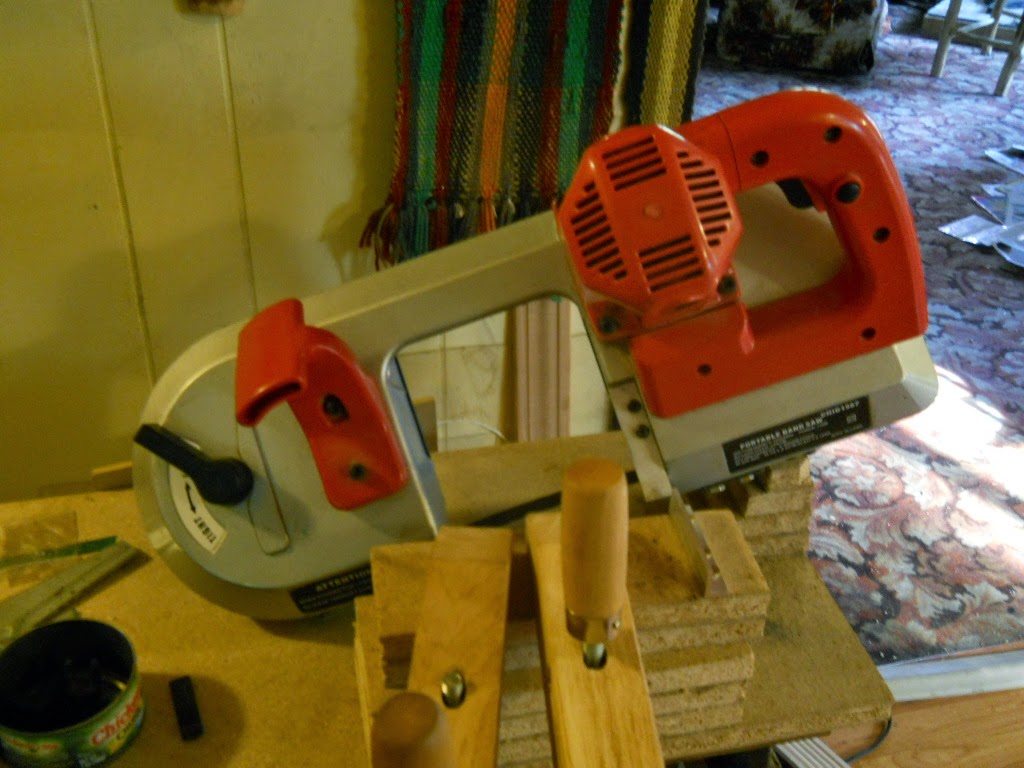 Voila, it works. More or less. I had to take off the cheapo "fence" that comes with it, it wouldn't clear. I made a replacement out of aluminum angle. I blew the first edition,  but it is serving as a stop. I  use some small C-clamps to clamp my stock.
The stock is held in the "vise block," a glued-up collection of particle board attached to the base by wood screws, AKA clamps. But I cannot place this block until I get a permanent vise. I have no idea what the vise will be.

This is a nuisance. I need a proper vise. A small one. I hope I don't have to make one, because making a vise is no mean task. Until I get a vise, this thing is a nuisance. It is hard to get it set up just right, unless you are Zaphod Beeblebrox and have three hands (A Hitchiker's Guide to the Galaxy, Douglas Adams).

But it is still, as it stands, much faster (or at least less work) than a hacksaw. I hate hacksawing, it is a lot of work!