As I mentioned before my Nikon Coolpix had a latch failure. The tiny little latch that holds the battery lid in place was broken off when I dropped it on the floor. I have improvised with scotch tape -- not duct tape; it stretches too much. Time for a more secure fix. Obviously I cannot photograph any of this because the camera was kaput. But I can show you the result. 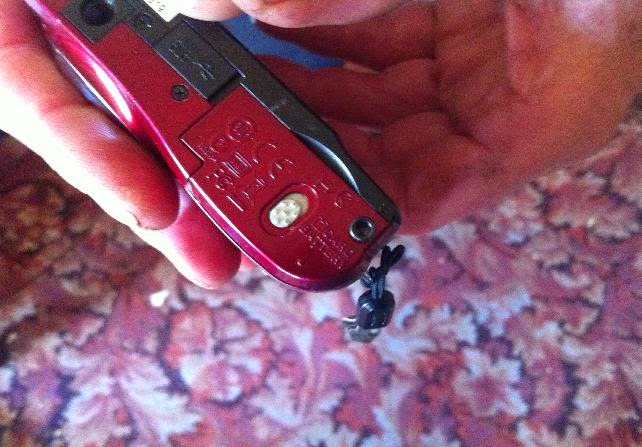 What I did is spend half the morning measuring the camera. I then put a screw through both lid and the plastic beneath. Little black thing lower right on Camera. It obviously has to be placed so that there is some "meat" underneath the hole, i.e. some plastic. We are running the risk of drilling into some very significant wire; but the camera did not work anyway, so what the hey! Now -- how to drill the hole? It must be drilled, or at least started,  on the Proxxon mill. I have .001 = .025 mm control on where I place the bit. I also have some tiny aircraft drill bits, Morse number 80 or so  (bigger the Morse number the smaller the bit; most confusing, about 0.6 mm) . The next problem is to drill the hole. My mill will not go high enough to go through lid and bottom. The lid, by the way, goes out and only then will it hinge.  So I put the hole on the bottom where I wanted it. After that I zeroed my dials so I could get back to the right spot. Then I closed the lid. Oh dear the bit broke when I cranked back. On a chance I said "maybe it will cut anyway." It did! Once you have a pilot hole it is not so hard.

What size screw? Well, I had #4-40 caphead screws, these are about 3mm and they worked. So after that I moved over to the drill press; drill and tap for #4-40, put in a screw.  A Coolpix costs about a hundred bucks. My repair is much cheaper. Even if I need an Allen wrench to change batteries. Thanks to John for photographing the repair.
Posted by JRC at 9:53 PM
Labels: camera repair