Two days ago, I saw the first robin of the season, up on a spruce tree and chattering away. But the birds I'm posting about have engines and need airstrips!

Alaska has more small planes per capita than any other state. Here in Mat-Su county, there is a small plane for every 160 residents or so, a staggering number.
The reasons are obvious: few roads, lots and lots of state -- a million square Km or so, twice as large as Venezuela, for instance. There are lots of interesting lakes, cabins, "and etcetera" about, but the only way to reach these spots is by plane (or a grueling overland trek) so lots of people have planes.

And the other day I went to the Willow airstrip, to see what I could see. 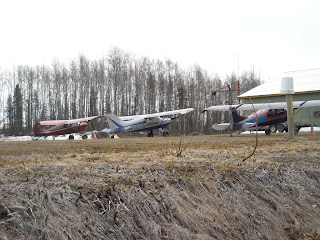 The Willow airstrip facilities are spread out over at least 1Km, far too much for a panoramic shot. But this bay is typical. There was also a sprightly old gentleman: 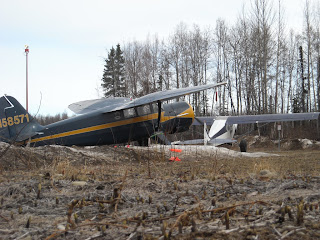 No hangar queen, this one; while I was there it was fired up and off it went to get gas. I'm no expert on older stuff; it might be a Waco or Lockheed ca. 1930-1950.
Beautiful plane. Big radial engine with a wonderful low-pitched growly tone, unlike the tenor buzz of most of these putt-putts, as my father used to call them.
Anyway, as Mr Waco (or Lockheed, or whatever -- I will call him Mr Waco for the purposes of this post) went for gas, I followed him, on foot to be sure, and came to another bay. 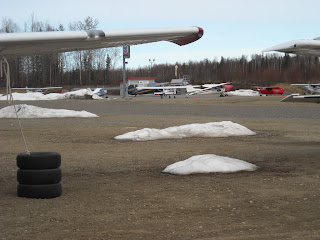 Still some snow about! Anyway, Mr Waco is getting gas, and there are lots more planes. Here, for instance, is a real bush plane: 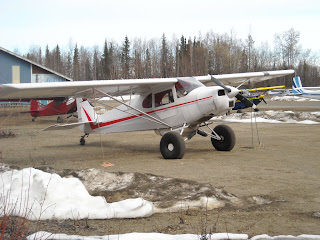 This a Piper Super Cub with enormous tires, called "Mickey Mouse tires" after the shoes worn by the eponymous cartoon character. If you fly into rough airstrips, these are mandatory; they prevent ground loops. Also note the pod under the plane; it allows this two-seater to carry some cargo. Many native villages get essential supplies from these little birds (can't land a jet at Ikikik, or Eek for short).

Eventually Mr Waco finished gassing up and returned to his parking place. I had hoped he would go shoot a few touch-and-gos, but no such luck. 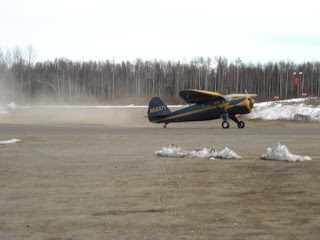 Gorgeous plane. Anyway, I started thinking. How many airstrips are there (besides Willow, which has facilities such as tiedowns, hangars, mechanics, gas, and a few other things? Well, I can think of five within a 15 Km radius offhand. These are private airstrips. Here is a view of Windsox strip: 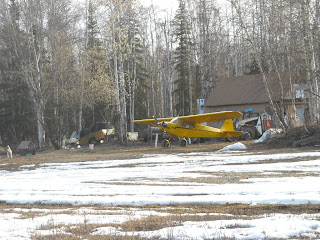 This is a Piper Cub, I believe; it is parked in the owner's back yard, which leads on to the strip. At far left, faithful Fido is guarding the plane; he barked like mad as I took the shot, but his tail was wagging furiously. Just doing his duty -- "you seem OK, but I must warn my owners! You might be the evil plane-wrecker! Woof!"

So I drove down to one of the ritzy neighborhoods, on Michigan Ave. and got a few more. This is one community where people commute to work -- by airplane. 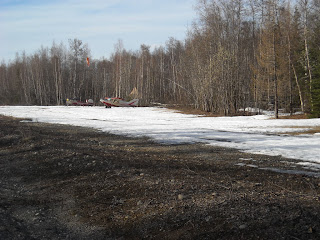 As you can see, the strips are not clear yet; the plane furthest from the camera has skis on and could probably get out, but the rest will have to wait a week or so.

I tried a few other strips, but they were covered in snow, so further pictures will have to wait, like the airstrips.

Then in summer there are float planes. These can get into the remote lakes. Again we will have to wait -- the lakes are still iced up.

And I can now walk in my yard. Mostly. Time to start getting the wood in for next winter. This is the time to do it, not fall when it's wet. That way it has all summer
to dry out.
Posted by JRC at 8:07 PM
Labels: airplanes, Alaska Aviation, small strips