Some say that Alaska has but two seasons, namely construction and winter. This is surely a harsh judgement. In reality we have the usual four, but winter lingers on a bit longer than, say, the lower 48 states. (Let us not exclude Hawaii. They have snow there too, you know. On the high mountains, to be sure, but it snows in Hawaii.) Anyway, we have signs of spring. In Alaska, this season is known as breakup, 'cause that's when the snow and ice relent and we know summer is coming. There are several signs of breakup. One is that the roads here start clearing up: 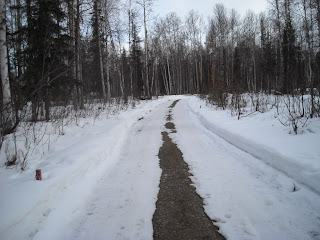 Above is part of my driveway (actually, it's a road. But if I want to get out in the winter, I have to plow it; the beneficient State of Alaska plows up to the school and that's it) and voila! The ground is visible. Somewhat like groundhog day. But the snow ain't gone yet! 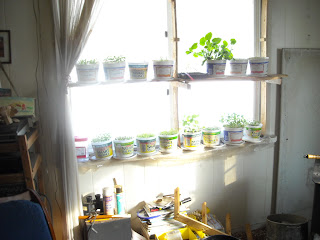 You see my transplants busily growing. There is enough light in March to start the seeds, and I do this faithfully. This window faces east and gets moring sun; my other window faces south; it, too has its quota of veggies. The big guys at the top shelf are zucchini. I will have to repot them soon -- but I'm out of potting soil, and the ground is frozen hard. No homemade potting soil possible. The shot is a classic backlight problem -- all the reflection from the snow makes exposure very difficult.

As I said before, the snow ain't gone yet. 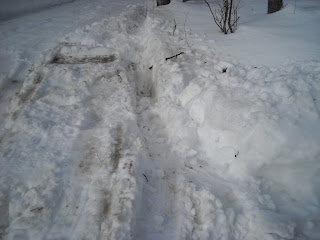 This is the aftermath of an unpleasant incident in my own dirveway. Skidded, and had to pull my car out with a come-along (never, never, travel in an Alaska winter, or spring, without a come-along!). Fortunately a large tree was nearby as an anchor. Beware of hubris. There's snow yet -- and it can get you.
Posted by JRC at 7:10 PM
Labels: 2010, breakup, spring, transplants