Back at the Navajo loom -- time for an update.

Having finished the previous placemat, I pulled out all (well, many) stops and am going for a ruglet. It is a curious expression, "pulling stops," it refers to pipe organ playing, where a rank of pipes -- say, a diapason -- is controlled by a sliding lever called a "stop." I digress. This can't be called as placemat; it's too big. So I am calling it a ruglet. 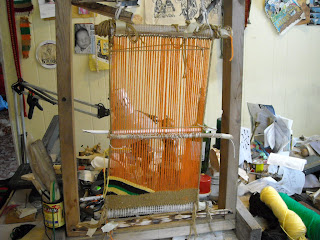 This is a technique described in my book as "diagonal stripe." Forst, you weave some stuff in plain weave (tan in the pic) to give you a foundation. Then you put in a small triangle, in this case at the bottom left corner, in dark brown. Then you put a stripe on top, and another stripe... on top of this. Use "earth tones," says the book. Well, OK. As best I can. Look at it as a farm. The brown, plowed; the yellow, crop; the green, water and/or growing crops. We, too, are art interpreters.

You have to figure out, in advance, how this is going to go -- how many centimeters per pattern. When the first row of stripes is laid in, Ruglet looked like this: Now an easy part, a row of plain weaving to separate the two sets of stripes I have planned (my plans for ruglet domination are almost complete, as Darth Spader would say). And, as of yesterday: 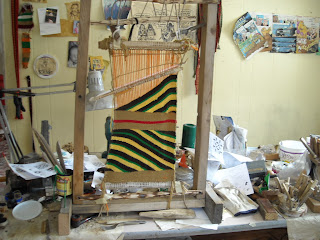 A momentous occasion in Ruglet's progress. You can see the dividing secton, but more importantly, the stripes on top are all the way across the weaving. Curious thing, diagonals: the right end (of the second set of stripes) is much closer to the top than the left. It is easy to make sheds at left, but very difficult on the right. Note how I have canted both sticks (shed stick and heddle stick) -- it makes it easier to have the sheds where you want them.

This rug is much easier than the last one. No lazy lines, no dovetails. I think it looks very handsome. (Hubris. Ha, lazy human! We, the Rug Gods, have some very unpleasant surprises in store for you!)

I will try to maintain the proper humble attitude.