In the last episode, we had plow plane v0.0 complete with flaws. Must make a new one. Now a plane, full-size or miniature -- I should say, a wooden plane -- is a block of wood with a peculiar hole in the middle. One side (back) is a ramp, at a precise angle, that supports the blade; the bed as it is called. The front side is another ramp, at a different angle. There are two ways (that I know about) to cut these holes. One is to drill, by hand or by press, some pilot holes at the correct angles. (The correct angle depends on what kind of plane it is. Typically the back ramp is 45 deg.). Then you hollow out the hole, with chisel or, better, a planemaker's float, which is a cross between a rasp and a chisel. The other way, popularized by the late and great James Krenov, cabinetmaker extraordinary, is to take a block of wood, saw it into three pieces longwise (rip), cut the middle piece to shape -- a simple task -- and glue it all back together again.

So I decided to do it the Krenov way. The rabbet plane of the previous post was done the first way; it was very difficult! I had, of course, no planemaker's floats. Fortunately, courtesy of my daughter, I have an old table. I cannot say what kind of wood it is, but it looks very much like some relative of mahogany, stained walnut. It's nice wood. First job is to cut the basic block to size. 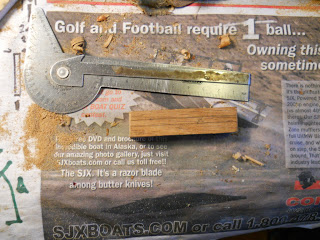 Sorry about the background. I've put newspaper down on my all-purpose dining, crafts, and arts table. But there's the block. How big? Interesting. What I did was measure Mr. Liu Ban, introduced in the last post. Then I played around with my old slide rule until I got a decent scale. (How old-fashioned! A slide rule! But it is much more convenient than a calculator. You can move the cursor around until you get a nice set of numbers far, far faster than punching numbers into a calculator.) The scale turned out to be 0.4; so the new plow is 66 mm long. All other numbers are nice whole mm. You can see that the block has been marked out into three parts. The middle is where the blade goes. So I made a new blade, microforge stuff, 4mm wide. The middle stripe is 4mm wide and it should have been wider, because you need some clearance. Hindsight is wonderful.

Next step is to drill some registration holes. This is so that when you put the thing back together again, it all lines up. It is a sandwich, you see. Then we cut the sandwich apart along the dotted lines. A classic rip cut. Mr. Krenov used a bandsaw for this, but he was working full size. If I had a small enough bandsaw I'd use it too; these cuts are critical. 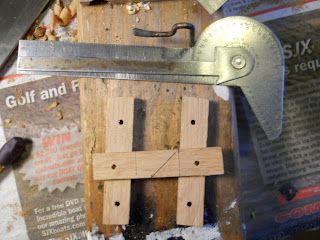 For this I used my miniature Dozuki saw. A Dozuki saw is a crosscut saw, but I used it because it has a paper-thin kerf. Above, the three pieces of the sandwich. In retrospect I should have drilled another two registration holes; not fatal. Now we mark out and cut the front ramp. I used the Krenov Kanonical angle, 62 deg. Liu Ban is 90 deg. I didn't like that, although it works perfectly well. I wanted a ramp. 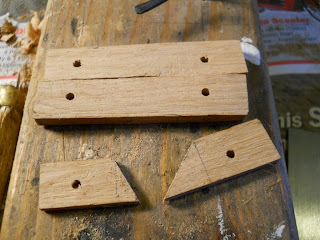 So there, cut out, is the filling of the sandwich. All angles correct, no fuss with floats. The registration holes were drilled such that they acommodate supermarket bamboo skewers, used for barbecues. I use them for dowel stock; they are about 2.8mm. So we push the skewers through the holes and assemble our sandwich. 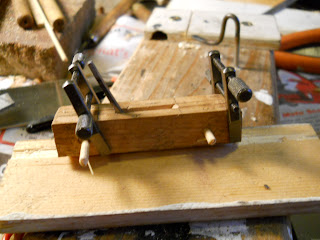 It might be a plane! The blade is much thicker than in v0.0; it is a piece of Sawz-all blade; makes magnificent blades (or knives!) Took a while to make and sharpen; worth it. Note the super micro machinist's clamps. Available from Lee Valley. At this point I realized I should have cut the center section a tad thicker. Sigh. So I filed the blade down a bit. Tedious. Moral: cut outside the scribed lines! Or scribe a little wider. In this scale a tenth mm is too much. Next step is to glue the sandwich together. 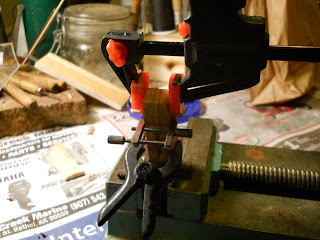 When gluing, there is no such thing as "too many clamps." You never have enough clamps, much like friends and money. After unclamping, we have to cut a groove in the bottom of the plane to accomodate the skate. Plow planes ride a skate, probably because wood would wear out in no time. Cutting the groove was very difficult. If I did this for a living I'd figure out some kind of a jig. But the result is now 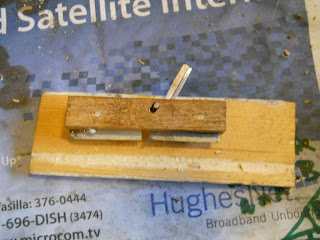 The skate is a piece of scrap sheet metal I found somewhere. It is in place, but not glued. A temporary wedge has been made for the blade. A pin to hold the wedge (in fact a common brad) has been added. At this point you have to fuss around until it all lines up. I epoxied the skate to the groove, screws are out of the question. The epoxy is drying as I write. I even filed a registration groove into the back of the blade to mate with the skate. That was a very difficult thing to do, but I did it. Swiss files are wonderful. Preliminary tests of v0.2 are are very favorable.

I have gone into all this detail (practically a tutorial) because I wanted to show how a Krenov plane is made. It is much easier than the traditional way. It is even easier if you work full size, because a tenth millimeter error won't hurt. Of course, you should read all of Krenov's books. You can Google him to good effect. The Fine Art of Cabinetmaking is the one you need if you want to make planes. Also very good is David Finck's Making & Mastering Wooden Planes (q.g.). Finck is one of Krenov's pupils. And if you are making full-size smoothing planes and don't do forging, you will need irons (blades) for your planes. See the Hock company's web page. You could also cut down regular plane blades, as Krenov did.

And I have introduced a new abbreviation, q.g. Patterned after q.v. which is Latin for quod vide (which see), it means quod google. Punch it in and go.
Posted by JRC at 5:54 PM
Labels: Krenov planes., Plow plane