Tippecanoe, without Tyler too

I have been setting up the Navajo loom for a new ruglet, and it is really mind-boggling. I'll report on that later. Meanwhile, I came across a reference to birchbark canoes on Bodger's forum. I needed a break from the loom, so why not build a model canoe? Tippecanoe and Tyler too. Now, most boats, from very small to very large, are built on the idea that first you build a frame and then you put on the skin -- planking, sealskin, whatever. But not a birchbark. Here, you are supposed to build a canoe form. Then the birchbark is shaped into the form, probably with the aid of boiling water. The hull is built inside the skin. The frame, gunwales (pronounced "gunnels" for some obscure reason) are sewn on to the skin with spruce root "thread." Well, OK, I said, a "model" will give me an idea of how this goes. So I grabbed a piece of paper, drew a canoe, cut it out, and cut birchbark (of which I have a substantial amount from firewood splitting). 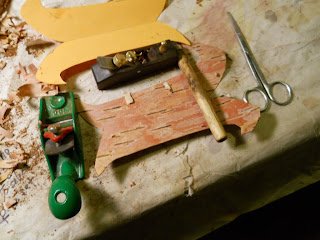 Behold, a pattern and likewise behold the skin. It was obvious that it wasn't going to bend. So I planed it down with my trusty palm plane (at left). At this point I decided, most unwisely, that I didn't need a canoe form. So I started sewing up the skin. As it turns out, this project is mostly needlework! 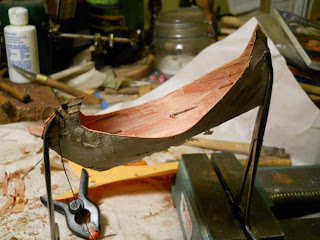 One of the main reasons you need a canoe form is that it holds the blasted thing while you do things to it. But here is Tip, now a canoe, being stiched. Ordinary needle and thread, because spruce root is obtainable but much too large for this tiny model. Sewing is quite tedious. Once Tip was stiched fore and aft, I made a start on the gunwales. There are two of them, one inboard and one outboard. I made the inner ones first: 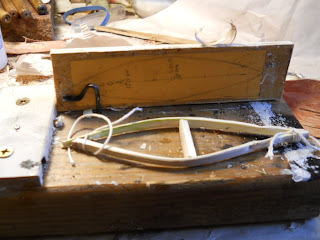 These are actually lilac gunwales! Prunings from the lilac tree. I shaped them with knife and miniature planes, then boiled them for a few minutes, Above is the hull plan, which has now morphed into a canoe form. I then sewed the gunwales into the hull. 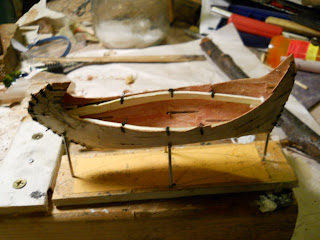 In retrospect I should have been more patient and done the outboard gunwales before sewing; then I wouldn't have to sew twice. Learning experience. Note that I now do indeed have a canoe form. Well, let's do the outboard gunwales. They have a big bend at the bow. At this point the jigs started to multiply. 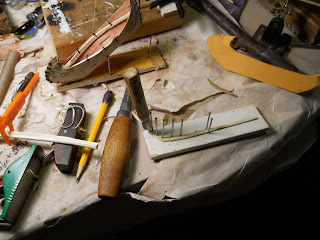 Here is lilac strip, planed, boiled and shaved so it will bend. The tools of the trade are scattered about; my idea of still life. Next step is to sew Tip's outboard to inboard gunwales. All this sewing requires a very small hole to be bored; you can't go through this stuff with a needle alone. I'm drilling about #35 Morse through two gunwales and one birchbark, using a jeweler's push drill; a marvellous aid to miniature work. 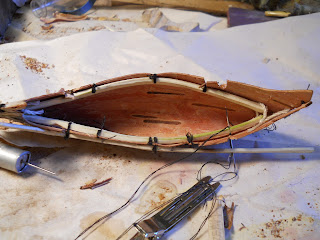 I started Tip on Monday; it is now Wednesday and here's Tip's status picture: 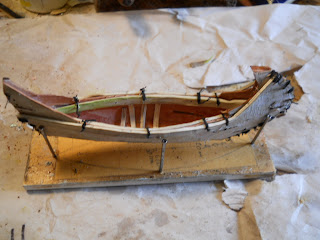 As you can see, the gunwales are in place. Bow to the right. I have started fitting the ribs. It is quite difficult to plane the ribs thin enough to fit in, even with boiling. I'm down to about a mm.

Tip is really not a model. Proportions wrong, for one thing. He is a test bed for construction techniques. It is much easier to build a model than a full size version, and it's -15C outside. Much too cold for a canoe. So I'm enjoying Tip, and will report as I go along.
Posted by JRC at 5:42 PM
Labels: miniature, model canoe