While I was planing down lilac branches for Tip the birchbark canoe, I found (and am still finding) that holding the wood down is the hard part. This is true whether you are planing big stuff or miniature --- if the wood will stay put, you can plane it. If it does not, you will have major trouble. So, I thought, how nice it would be if I could cut a groove in a board. That would hold the strip down much better than my hand. Now cutting grooves is a job for a plow plane. And since most of my Christmas presents are done, why not make a miniature plow plane? I happen to own a perfectly good Liu Ban plow plane, made in Hong Kong, but it is much too large for what I want to do. So I hauled out my book, Making Traditional Wooden Planes by James Whelan and imitated. 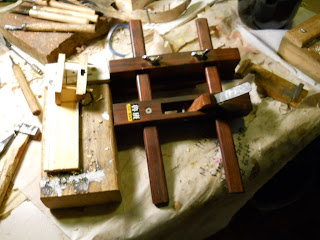 At right is the full-size article by Mr. Liu Ban, and very handsome it is too in Chinese rosewood. It takes some adjusting and fussing but it plows very nice grooves. At left, a 70mm plow plane made out of brand X wood (found somewhere) with a 3mm cutter made out of a retired hacksaw blade. Does it work? After a fashion. Plow planes are strange creatures (you can Google "plow plane" if you're interested). They ride on a skate, a thin piece of metal that also supports the blade. The skate has to be centered on the blade. The skate gave me catfits. I wound up padding a piece of sheet metal with old circular saw blade pieces; the whole thing epoxied. Real planes are allowed to use screws. But at 70 mm you'd need watchmaker's screws. Well, it shows promise but needs more work. If Liu Ban is fussy, midget plane is amazingly fussy. It is hard to get the right cutter depth. The blade is too flexible. The bedding angle is wrong (I used 45 deg, the usual angle for a plane; it is too steep). So now underway is plow plane v0.5. Much thicker blade, thick skate. Different angles.

This is my second miniature plane. Sometime last winter I made a miniature rabbet plane. I made it mostly out of birch. 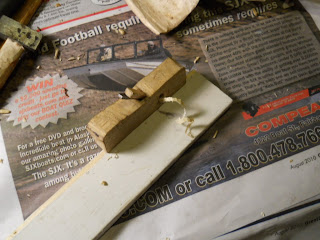 It wouldn't work. This morning I discovered I had the bevel reversed (blush) and it now works very nicely. Here it is planing a rabbet (or rebate) in a piece of pine. Lovely curly shaving; it works! So I am happy. Most planes work bevel down.

I will have some more things to say about plane construction later. The things I will say come from full-size practice, so they are applicable to full-size planes as well.
Posted by JRC at 6:16 PM
Labels: small planes