Mary, Mary, quite contrary... I don't know about Mary, but contrary is a fine description for an Alaska spring. We have had about a whole week of above-zero days, 0C of course and there is a temptation to rush out and start planting. But I have seen frost in early June. So all this sunlight, as my friend Don said today (he is a market gardener with much experience) and we can't use it. If the wind don't get you the frost will. So we are focused on preparing the garden. Memorial day is the target day. Anyway, there is prepping to be done. 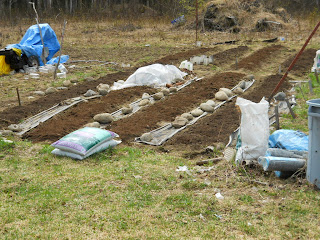 We actually have things growing. Under the hoop are leeks. They overwintered successfully and and will now hopefully grow up to be larger leeks. Leeks, you see, are biennials -- take two seasons to grow. In fall I mulched very heavily and put up the hoops. The tops were a little burned by the cold, but they are green and seem happy. Behind the leeks are artichokes. Artichokes are really biennials, but (thanks to my extensive reading) they can be vernalized. That is, you put them out very early. This tricks the artichokes into thinking that they have been through the winter. Will it work? No idea. Artichokes are not, apparently, as smart as leeks. I put them into my fruit-juice container cloches. I am a big fan of cloches. Too labor-intensive for market gardeners, but not for me.

The beds have been spaded. The B(ack) beds, which got the rough and ready tiller treatment last year, got the de luxe treatment: went through by hand and pulled out roots, old boots, and dandelion shoots. Also added some organic matter from a nearby discard heap. All my front beds need is a surface till. Then we spread manure -- bought, I don't have a horse or a steer -- and the last step is to rake it all in. Not yet.

Now the heavy work. I took Manfred the Red Baron out of hibernation and off he went. 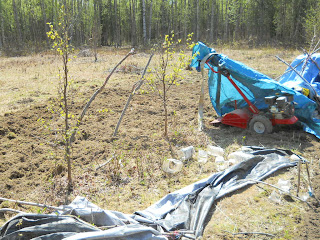 On soil this rough, it is rough going for Manfred. And even rougher on the operator. There are any number of pictures on the 'net and elsewhere of people driving these things with one hand. Hah! Yes, after you've tilled it a few times. But it gets stuck -- big root in the way. Or it can't get traction. So horse it by brute force. It has just dawned on me that the "till" control bar is split. Could there be individual wheel drive? Got to try that. Anyway this is the site of the future greenhouse. Manfred also did the herb bed and a bunch of stuff intended to keep the weeds at bay (hopeless, but at least the till helps). 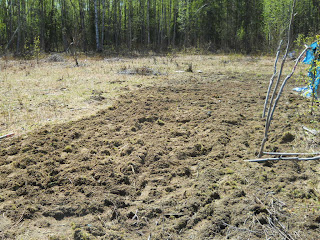 And at the end of the morning we have a lot more arable land. Actually tilled land. The operator was a basket case, and spent the rest of the afternoon taking it easy. And I will not comment, yet, on the new greenhouse.
Posted by JRC at 5:59 PM