Grappa and the Alder Subway

I put in a big order to Lehman's non-electric, non-power emporium. Among the items I ordered was a big heavy Italian-style grape hoe. This is no wimp. The head weighs in at a Kilo and a half (3 lb.) and it has a hickory handle. Although the blade is made in distant China, it is modeled on the Italian style -- so it has been dubbed Grappa. (An italian brandy made out of grapes.) Now, when I cleared the pasture with the scythe, perforce I left a whole bunch of stumps, scrub birch and especially alder. I would deal with these later, said I. Well, later has arrived and I have put Grappa to work. 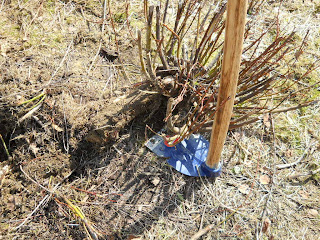 Here you see Grappa and one of his early victims. I actually had to chop out the root of the thing. You can see it, extending from the center towards the southwest of the picture. It is thicker than my arm. If the ground were not frozen below 10cm (4") I would have followed it down to see how long it is. More hoeing on other clumps revealed roots more than a meter long; not quite as thick as the monster above. I have a veritable alder subway running into the pasture. Fortunately Grappa is sharp, and I help it along. A hoe has to be sharpened just like any other cutting tool.

I must say this is very heavy work. I have since learned to carry a pruning saw. This makes cutting up the roots a little easier. But still, there is nothing like agriculture for sheer undiluted manual labor. When the soil warms up, I will try the tractor on some of these stumps. The size of the clump has nothing to do with the size of the taproot. Some tiddly little clumps have arm-size taproots.

Birches are much easier. The root doesen't go as deep. I think we are missing a bet. We should train alder roots to go in desired directions. The chunnel (Channel Tunnel) would be a breeze for these alders.
Posted by JRC at 7:14 PM
Labels: agriculture, grape hoe