I have a great many books -- every one I ever ran across, in fact -- on gardening in Alaska. Not one of them even whispers about leeks. I love leeks. Ah, vichysoisse! Basically leek-and-potato soup, but what a soup! The reason these veggies are not mentioned is because they are biennials. That is, they set themselves up the first season and complete their growth in the next. And in the meantime there is winter, an Alaska winter at that. But I read Eliot Coleman's The Four Season Harvest and was blown away. He grows stuff in the inhospitable climate of Maine. Could I do it? So last year I planted about a meter of one row in leeks. They grew to about the size of large scallions. So I pulled a few and ate them anyway. Then I improvised a plastic tunnel and shoveled in a million or so fall leaves in. Soon it was covered by snow. Excellent. Snow is a great insulator. When the snow melted there they were! 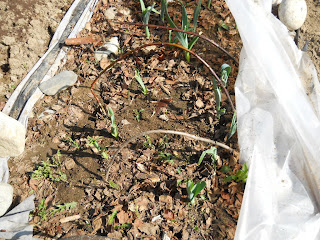 You can see my methods are hardly high-tech. Alder hoops, visqueen cover, lots and lots of birch leaves, and nothing else. You will also see some Rebel Dandelions. As Darth Spader would say, we shall soon put this rebellion down.

Something ate the tops o' the leeks. Maybe a vole, or maybe the cold. But I have overwintered leeks in Alaska, and it might even be a first.
Posted by JRC at 6:49 PM