Repoussé is a French word meaning, perhaps, "repushed." It involves beating sheet metal into useful forms. Usually copper or brass is the victim. The tool of choice is called, unsurprisingly, a repoussé hammer. Now these hammers are not hard to come by. In fact, in a pinch, you could walk into your local auto parts shop and find a body and fender-beating hammer. If they have a small one you are in business for under twenty bucks. After all, beating dents out of fenders is in fact repoussé, so it is not surprising the tools are the same. In fact, I own one; $16 at NAPA auto parts. Much too big for what I want, though. I'm the miniature dude; in winter at least. So I decided to roll my own repoussé hammer.

We started with a piece of cylindrical steel, probably a broken socket wrench handle. I think I found it somewhere. We put it in the lathe and used a parting tool to cut it to the proper length. Five minute's work with a hacksaw confirmed that hacksawing is not the way to go. Tough stuff. Even so, it is very difficult to part off on a lathe. Even the super-guys in Model Engineeering magazine quail when parting-off time comes. But eventually we got out a usable piece. We then turned it to shape in the lathe. 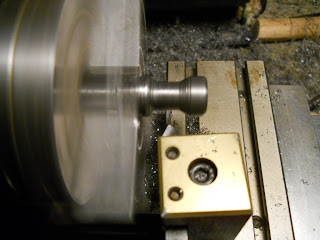 The diameter of the poll is about 15mm. I did not take one measurement in the entire process; all done by eye, Very liberating. Above I am turning out the poll end of the flattener, This is actually an ex post facto pic; that is why the tool is retracted so much. But note the chuck whirling about. Do not get your fingers anywhere near a spinning chuck. If you do, you will lose some fingers.

With the form of the hammer established, the next job is to drill out a slot for the handle. Toughest part of the project. Ideally, one has a milling machine. With this and proper tooling, one can cut slots at will. I do not own such a machine. So we do it the hard way, on the drill press. I could not figure out how to hold this piece on the milling attachment on the Taig lathe. 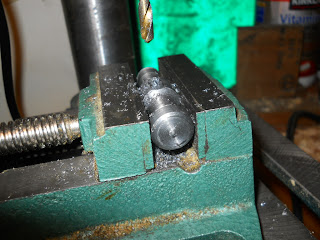 We want to drill a 10x5 mm slot. More or less. Ideally we would drill overlapping holes. Then we could get rid of the extraneous material by filing. The trouble with drilling is that the drill wanders. It looks very rigid when you take it out of its index box. But it isn't. It will bend as much as 2-3mm and that is a disaster. That is why you center-punch holes for your drills. The center punch makes the drill bit fall into the center punched dimple. This was a real ordeal; but eventually I got it done. Next job was to fit a handle to it. I had a convenient piece of alder lying around. So on it went; a matter of whittling, nothing more. 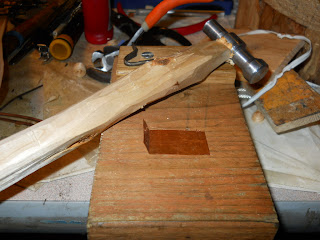 And there's my repoussé hammer. Ideally the thinner end, the one to the left, would be domed, i.e. spherical. But doming is a matter beyond my simple equipment. I will file it some; but still, not bad for one day's work; spread over two days. The piece of copper lying on the bench hook is the hammer's first victim. It flattened out in no time!

Once again in the land of ideals, a repoussé hammer should have a "whippy" handle. Yeah, well. Maybe next summer I'll fit one. Right now everything is frozen solid.
Posted by JRC at 7:19 PM
Labels: Repoussé hammer