Last year I observed that the Alaska Railroad (an Alaska institution, you can Google it and I will post on it sometime) was tearing up and replacing trackage near my dwelling. After the crews had left I moseyed over. I was looking for a piece of rail that I could make into an anvil.

You have to realize that rail is very heavy. It is graded in RGU (Ridiculous Gringo Units) in pounds per yard. Thus, 85lb. rail (about as light as you can get) weighs 85 lb. per yard, about 40 Kg per meter. I finally found a piece that I could drag over to the car, barely. Maybe it was 100 lb. rail! Weyger's book has instructions on how to turn one of these things into an anvil.

While I was mulling over how to turn this thing into an anvil, friends took a hand. One day my rail went off to Eagle River, where Steve worked it over. What came back was a work of art. 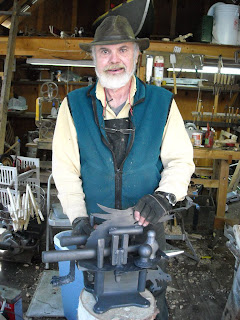 As you can see, the anvil has a top, which is detachable. It fits down over the pritchel hole. The top holds hammers, formers, and accesories. There is a dragon attached to the top. The top comes off and there is the anvil (complete with its own dragon): 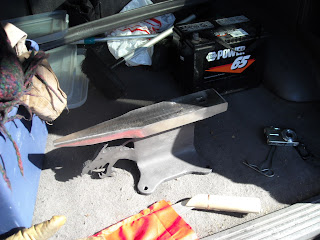 I still have to bolt it to its stump. The garden has been a priority, but it is starting to do its thing and I can get back to other projects. It is so nice to have friends. Thank you, Steve. Thank you, Leta. I have seen stuff labeled "sculpture" in art museums that is far, far, uglier. A work of art, and it will be used.
Posted by JRC at 7:53 PM
Labels: anvil, blacksmith