A ploe Lathe takes shape (and makes a shape)

The other day, Neoni came by. She wanted a "potion bottle." No doubt for some deeply secret witchery. At the time, I was getting very tired (gardens are very demanding), so I had to tell her to come back later. She hasn't, but that catalyzed the pole lathe project. A pole lathe is a lathe with a springpole return. The lathe cuts in one direction, propelled by a cord, In the other direction, rewinding, you don't cut. The Vikings used them and I doubt very much that they invented them. I have built a couple of small ones but it's time for the real thing. This winter I split a log in half and mortised it to accept some 2x8 I had salvaged. 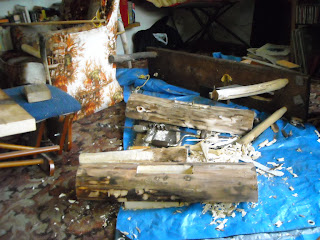 It so happened that I tried to make a pole lathe out of a Work-Mate, the best British invention since the steam engine. It didn't work. A Workmate is too flimsy and has too many braces for the thing to work. But I had a lot of stuff left over from that idea. So I built the lathe to suit. We put in our 2x8, add some scrap 2x4 for rails, and voila, a proto-lathe: 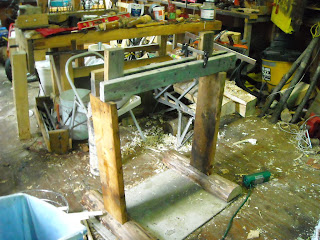 As you see, the rails (or bed) are spanned by 2x4 pieces with pointed spikes sticking out of them. These are called poppets. For the moment, the poppets are simply clamped in place. Now we wind a piece of clothesline around a workpiece. We attach the cord at one end to a treadle and the other end to a springy pole. No, wait. Not enough room in the shop. So instead of a springpole, we use modern tech: a bungee cord. 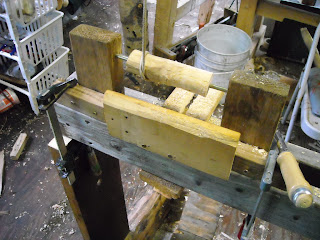 The tool rest supports the lathe tool. Above, I have used a plain ordinary carpenter's gouge to rough out a cylinder. Below, the treadle can be seen . You push down with your foot; the cord rotates the lathe towards you. The bungee cord, which you cannot see, is above the picture. When the treadle has hit the floor, the bungee brings the treadle back up. You can see the treadle better here: 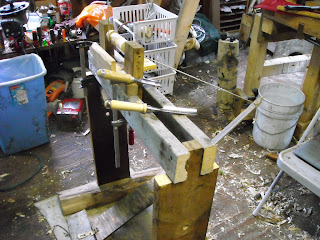 In practice, I put one foot one the cross-board at bottom and push down on the tradle with the other. The work rotates towards me. I apply the tool. Good grief, how primitive! It's fun. And pretty soon, you have something that might become a potion bottle: 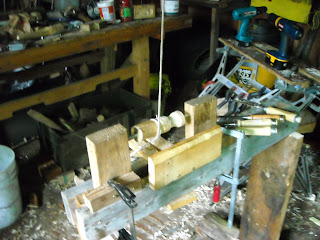 Reading Mike Abbott's Living Wood book, I found that I have to do two wraps of the cord, not one; and also that my toolrest height probably should be higher. On the other hand, it works fine with the gouges shown on the bed at left. The potion bottle proceeds apace. There is a lot to be done with this critter yet. Stay tuned. Meanwhile, the potion notion, er, bottle is looking better every day, in spite of frequent halts to improve something or other on the lathe.

One very nice thing about the treadle lathe is that it can be used safely by children. If they mess up, the lathe just stops. On a motor lathe, you get the tool back in your face. Possible serious injury. Maybe I will train Neoni and we can go into the potion bottle business.
Posted by JRC at 6:37 PM
Labels: pole lathe