No, there are no silver bells nor cockle-shells, but at least the garden has progressed beyond the trauma ward state. This happens every year. I transplant. Plants keel over. They will die! No -- it looks bad, but they will make it. If they don't, well, eugenics may have some justification. 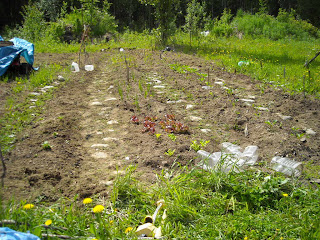 There are really two sections to the garden: new and old. When I got the tiller, I doubled the size of the garden (and also the amount of weeding). You can see the division where the plastic juice containers (now water containers) are, at left. Also left is potato row, which is cycled every year -- crop rotation -- and you can just see the spuds coming up. Next row over at the front, lettuces. They looked like goners; but they have recovered. They have been de-cloched. The third row (left to right) is brassica row; we have cabbages (but no kings), broccoli, cauliflower, and such. The last row is root crop row, containing beets, parsnips, carrots, "and etcetera," as the King of Siam says in the musical.

We had a hot May -- I could have planted a week sooner. A posteriori guesses are disallowed in agriculture. We now have a cool and cloudy June. Just like last year. We are, after all, dependent on nature. We go, as Gene Logsdon says, at Nature's pace.

Meanwhile, the Goat Farm in the village is doing well: 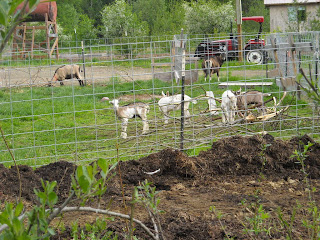 There are four new kids on the block, or in the garth to be more accurate. They come up to the fence and wag their tails. "Meh, meh," they say. I suspect this means "feed me, feed me," in Goat 101. But they are cute. Amazingly, Goat Farm goats stay put. They do not escape. I suspect black magic. Never saw a goat that couldn't leap over a tiddly fence like that in the picture. Not these guys (or gals). Black magic. Dark side of the force. Darth Spader would be proud.
Posted by JRC at 6:00 PM
Labels: 2010, garden