Meteorology and the garden

The year 2010 has had very unusual weather conditions. It was wet, wet, and wetter all summer long, after about June 10. So now we have yet another unusual phenomenon: fall fog. Usually September is very wet (hence my haste to get the winter wood cut, see previous posts). But so far, what we have had in September is fog. Early in the month we got a high-pressure system overhead, most unusual. No wind, you see, in a high. The high has persisted until today. I note the barometer has fallen about 3 mb since yesterday. But the ground is sopping wet still. So the water turns to vapor and goes up into the air. At night the ground cools off, and so the water vapor condenses. No wind, as I said. Voila, fog. Today was really thick, so much that the Weather Service issued a "fog advisory." I find the terminology ridiculous, since "advisory" is an adjective and not a noun. Perhaps NWS (National Weather Service) needs the services of an "expert dialectician and grammarian" such as Prof. Henry Higgins. The NWS uses "warning" for "really serious stuff" and "advisory" for "be careful." Why they couldn't use "alert" instead of advisory is beyond me. End rant.

But visibility this morning was about 400m in good places and 100m in bad. Eventually the fog lifts as the sun evaporates it again, but today it didn't lift until about 3PM.

As I have said before, this has nothing to do with the so-called "Global Warming" fraud, but instead has everything to do with the Pacific Decadal Oscillation, or PDO. The really interesting question is what causes the PDO. However, fog it is. It is so thick that it's like rain, you get wet going outside. The garden doesen't seem to mind. 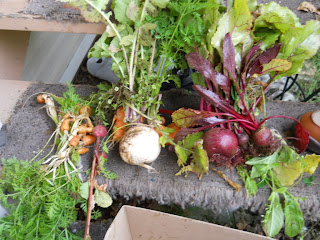 The carrots at left are the best I have ever had, even though they are warped. There were even a few radishes lurking, so I pulled them. Garden almost at end. There are still the oats, the year's big experiment. In spite of all the rain, some of them have oated! Oats are supposed to grow well in Alaska. I am leaving them in the ground as late as possible while we still have sunlight. Pictures next time.
Posted by JRC at 6:11 PM
Labels: garden, meteorology, PDO