Fall is rushing in. Some of the birches -- the small ones -- have started to turn. So the prudent sourdough, defying skies the color of lead, must look to endgame in the garden and also to his firewood pile. It has been a very wet summer, as is (unfortunately -- sigh!) to be expected from the cold cycle of the Pacific Decadal Oscillation, or PDO. I think I said it before, but it should be called PTO for Pacific Tridecadal Oscillation. Unfortunately this could be confused with the Power Take Off on your tractor. Maybe PDTO? Anyway, I went out to the garden, weeded (it never ends) and pulled some of the beets and all of the onions. The "new" part of the garden has, as I expected, not yielded well; it needs much more manure! However... 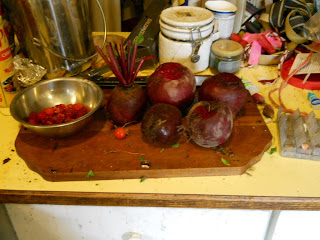 ...what I got was good. Last year I simply forgot the beets. Before that, I pulled too late and the beets were huge, but not as tasty. Root crops are great in Alaska, rainy weather or no. Alas, the onions were a washout (literally). The raspberries are from a volunteer patch that came out of nowhere. I am encouraging them. They are spreading. We will have to watch them, but this is good. Cultivation is simple: don't scythe them or use the lawnmower near them! There will also be cauliflower; it was touch and go but the plants finally decided to cauliflate (a word I have just made up). Broccoli is weaker. Tomatoes, miserable. Oh well. The garden is in end-game mode, as I said: 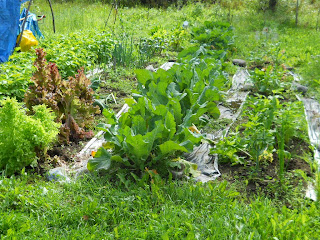 The lettuce, front and left, is still edible even if it is running away. I dread the return to store-bought lettuce. I think the potatos are ready to dig.

On the firewood front, I have never had so much wood since the stove was put in. 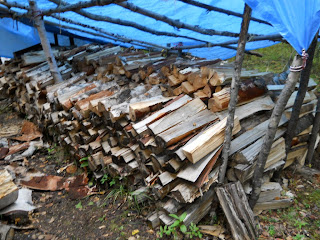 Five droob rows! Almost two full cords. And there is more waiting for Mr Jack, the Splitter. Jack has made all this possible. No matter what they tell you, it is much, much easier to use a power splitter than a maul. Now, understand me, I love to split wood with a maul. But it takes a day to get my eye in. Plus you need a good block. And the wood goes all over the place when you hit it. And your block rots. And lifting a nine-pound (four kilo) maul is no joke. No... Jack has made a huge difference in (to quote T.H. White in Mistress Masham's Repose) in my domestick Oeconomy. The O and the e in that last should be run together; don't know how to do that in Blogger. I have still had to use the maul on wood so gnarly that St. Peter himself would utter obscenities. But this is nature. And there is still this one birch on the power line right-of-way (PLRW) . It is jackstraws. When my neighbor decided to clear out his front yard, he used a gigantic machine with a power claw-like tentacle and hydraulic whatzis all over the place. The trees are piled up just like giant jackstraws on the PLRW. The logs are all connected. Most of them are Aspen. I'd much rather burn birch. The tractor could resolve the problem. instantly. So maybe it is time to investigate Lysander's starting problems. We shall see.
Posted by JRC at 6:20 PM
Labels: agriculture, beets, firewood, garden