The saga of the Crafts Tableau continues with the making of the loom. This thing took more time than all the rest of it put together. It all began with Roy Underhill's book, The Woodwright's Eclectic Workshop. In there are the plans for a full-size loom. So, for once, I had a plan. Usually I go by eye, and one or two sketches. Roy's stuff is all RGU, feet and inches. So, after some playing around, I decided on (as I recall) 1 foot = 1 cm. This is about 1:30. A big reduction. Roy suggests you use mill-sawn timber. Well, no nano-scale lumberyards are available here, so I set up my own and got timber from odd pieces of birch branch stock. 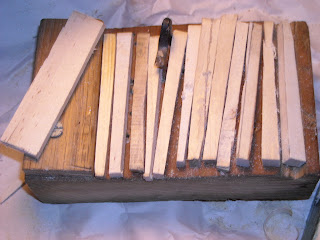 All this was ripped from branches with my trusty miniature Ryoba saw. The timbers are roughly 6mm square. They are sitting on my equally trusty bench hook, and do note the microforged holdfast in the middle of the hook. Very useful contraption and easy to forge. Just like full size.

Roy's loom is held together with mortise and tenon joints. I thought I could do no less, but the mortises are 2mm wide. Just try to buy a 2mm mortise chisel. (Actually, if you have a cooperative dentist, you might find that one of his or her dental scrapers will do the trick.) So I took time out and made such a chisel. 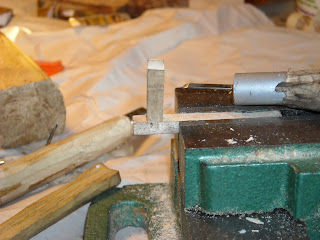 Above, the chisel sitting on the vise. My first mortise was really a dado (I have since learned to make real mortises) but hey, it's a pretty good fit! After a lot of this stuff, I had one side of the loom. 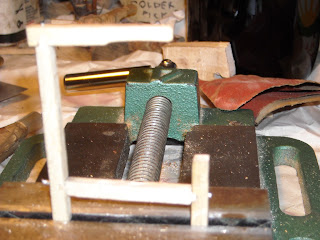 A bit blurry. I drilled very small holes and pushed "pins" made out of wire into the holes. I really couldn't peg them; at this scale pegs would be about 0.5mm and that's just too small for wood. I am using drills somewhere around #60 Morse, held in a jeweller's drill. Here's the exploded view, so to speak. 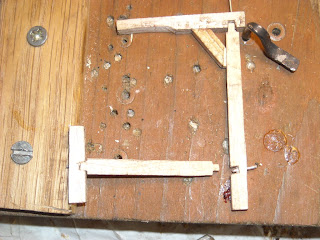 The pegs may look thick in this close-up. They are in fact tiny, about 0.5mm, the size of a thin pencil lead.

So the frame came together. Somewhere in here I decided I wanted a working loom. So I made heddles. A heddle is either string or steel with a loop or hole in the middle. It is attached to a frame, which lowers or raises a group of strings. Again, no way I could see to do this in wood, with tiny loops. So I did the heddle pins in steel with a wooden frame. I can find no pictures of this process. I wasn't sure it would work! But eventually... 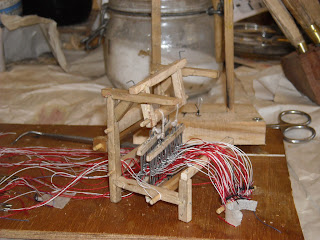 ... the heddle frames and heddles were finished. Here I have actually warped the loom. The warps are the long threads running through the heddles. The white threads all go on one frame, the red ones on the other. The threads are ordinary sewing thread; I had to use a needle to get them through the eyes. Excruciating! You can see that I have put on the beams. These are rollers -- the one in front rolls up the completed cloth; the one in back holds the thread.

At this point, spring and summer intervened. So I put the loom and friends up on the drying rack on top of my furnace. And one dark and stormy night I bumped into the rack and dumped the whole thing on the floor. The threads got tangled beyond repair. I decided to weave anyway. All I wanted was a few rows, to show the loom would work if I didn't have all those tangles. To do so, I had to make a loom elevator jig. I had to get under it to operate the heddles. One's fingers are not scaled 1:30. Indeed, they are not scalable. I could have also re-warped the whole thing. I decided not to. Unwise, perhaps; but it takes about two hours and a lot of cursing to do. Everything tangles up. 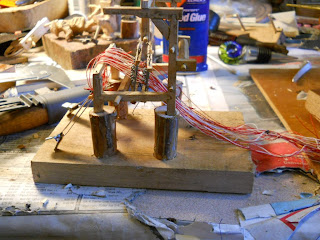 I raised the loom up on four branchwood posts. This wasn't enough. The loom tended to jump out of the posts. So I improvised a hold-down based on a spanish windlass. And here is loom in (almost) weave mode. 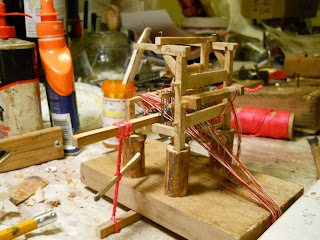 Here you see the hold-down and the warp threads being tied to the warp beam. With this, I actually wove three rows. Had to use a needle as a shuttle. But it did, in the end, work. In retrospect I should have tied one end of the warps directly to the cloth beam. That would have cut down on the amount of work I had to do, and also reduced the tangle factor. Wise after the event.

Maybe the project was too ambitious. Maybe not. You don't know what you can do until you really push, and not just in loom-making, either.
Posted by JRC at 6:13 PM
Labels: miniatures, Nano Loom, tableau