Recently I began carving a bull moose out of Ben Hunt's book on whittling. Alas, out of print; it sometimes turns up in used bookstores (which is where I got my copy). The only difficult part is Moosie's antlers. They are less than 20 mm longways. I have a real specimen to copy (see some previous post last year!) The real problem was holding the blasted things as I carved them. I nearly gouged my fingers off doing it. Couldn't put an antler in the metal vise; it would have crushed them or at least scratched them. I needed a very small vise to hold very small carvings.

Now a vise is not all that different from the Nano X-table of the previous post. This one had to be made of wood, to avoid scratches on carvings. Instead of a table, the moveable jaw of the vise is substituted. A manic session with miniature Dozuki and Ryoba saws, and a trip to the drill press, and Nano Vise came to life: 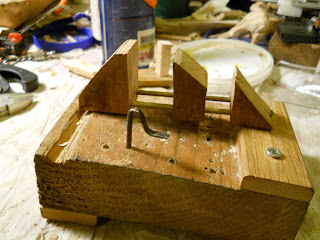 The NanoVise has a pair of fixed pieces (right and left) and a movable piece, the jaw part. This jaw, in the center of the above pic, slides on ways made out of brass rod. I bought the brass rod, I must admit; very difficult to find it thrown away, especially in Alaska midwinter. Buck and a half, I think. It is very difficult to drill the holes for both NanoX-table and NanoVise. It has to line up in two directions.
The holes have to be the same distance apart, but they also have to line up horizontally. I solved the first problem by making a drilling template out of scrap metal. Never throw away anything! The horizontal problem is only partially solved. If you had a very long drill of the proper size, and a great big drill press, it would be easy. So we impro-vised. Ouch.

The next job is to turn the feed screw (another found long bolt, 8-32 RGU). You have already seen this in the NanoX-table post. When it came to collars for the feed screw, however, I wound up microforging the collars out of brads. Much better than the plastic on the Xtable, but a lot more work, too. 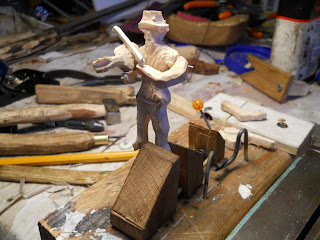 Here NanoVise is seen holding Anton the Fiddler, a protagonist in the upcoming Tyrolean Music Tableau, date of release uncertain. I cross-drilled the feed screw and stuck a brad through it to act as a vise handle. I used a bead from a found plastic necklace to keep the brad in its proper place. Expect to see lots of future appearances of NanoVise. The feed nut was epoxied to the moving jaw, as in NanoX-table.

I am really glad I spent a few days making this vise. It has already paid back its price in utility. Miniature carving demands miniature fixtures. There are a few problems with NanoVise. If you are not careful the pressure of the jaws will force the ways right out of their holes. This, of course, is why version 2.0 was invented in the first place. So stay tuned. And for those who dote on measurements, NanoVise is 83 mm long. (I was trying for 80, but you can't win them all).
Posted by JRC at 9:15 PM
Labels: Nano devices, nano vise