The Music Tableu, Episode I

An alternate label for this post could be "work in progress." Anyway, it occured to me that a bunch of Tyrolean-style musicians would be a great addition to my tableaux. The woodsmen, the craftsmen -- they need entertainment. So let's have a band! Yuch-he! as they used to say --and possibly still do -- in the Tyrol. It means, more or less, "yippee!"

The construction of a tableu begins with a single sketch. 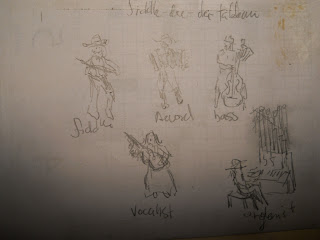 Hmm, a little dark at the bottom. Have to work on the lighting a bit more. But it gives you an idea. Sometimes I will make more sketches of what I want. This time I didn't. There is a fiddler, an accordionist, a bass player (morphed into a woman in the final version), a vocalist with guitar, and an organist. I threw the organist in because I love pipe organs.

In this tableau, I made the musical instruments first and then carved the figures to suit. Anton the fiddler you have seen (being held by the Nano Vise) so I'll skip him. The accordion player came next. How do you carve a figure? Well, a real sculptor would no doubt have catfits looking at what I do. But I begin with a piece of wood collected during summer for just this purpose. Usually a branch. Then I saw two more or less parallel flats in it. 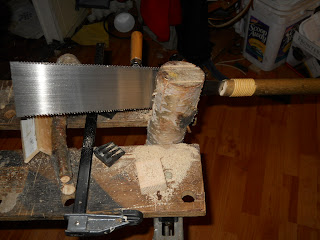 This is heavy work, the miniature Ryoba saw won't hack it (literally), so I'm using a big Ryoba in rip mode. Then I draw the figure on one of the flats and start roughing out. 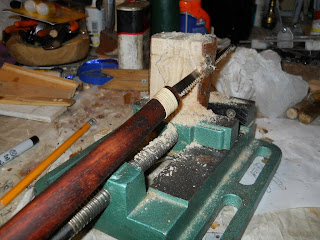 Here, I am using a miniature Japanese keyhole saw to cut away superflous wood. This saw cuts very quickly, but it is not too good at getting around sharp turns, so eventually we resort to the turning saw, covered in a previous post. It is slower but much better at turning corners. 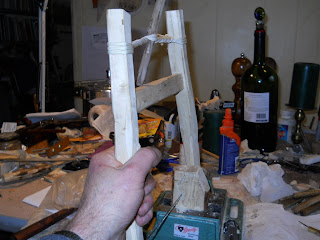 Mr Turning saw has a narrow bandsaw blade in him. You might say, "why didn't you use the bandsaw?" I answer, it was -20C in my shop. Just try using a bandsaw at that temperature! For rough work, I think a bandsaw is legitimate. But not at twenty below. Eventually we get something that vaguely resembles an accordionist. 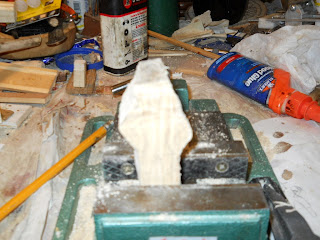 At this point we can begin carving. I didn't take pictures of this stage. We use gouges (my own home-made gouges) and the occasional chisel to do this. As the duck decoy carver said, "start with a block of wood and cut away anything that doesen't look like a duck." Very sound advice; woodcarving in few words. At some intermediate stage, accordionist looks like 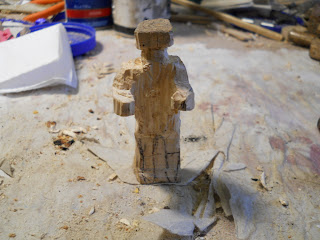 Looks a little better. You can see where the accordion fits in. Some more work, and we get Not finished yet. But now recognizable. I never found a carving book yet that would put in all the steps you go through. However, I did find a book on duck decoy carving that went step by step; most of my carving technique is derived from that book! So, mostly, I do it this way because I taught myself by trial and error. Now it is time for the finicky details, such as features, round corners off, and so on. Accordionist is, by the way, 75mm high. I didn't plan for such a number -- scale is done by eye.

And that is enough for one post. Next time we might look at the organ.
Posted by JRC at 7:19 PM
Labels: miniatures, music tableau, tableau