"Alder Subway" is a term I coined a while back for the root network formed by these incredibly hardy trees. When I got this property a while back, I had a big area, maybe 200 by 50 meters, which was, I suspect, a pasture in distant times. No doubt goats grazed happily there. But by the time I got there the alders had the upper hand, with the assistance of odd willows and birch saplings. With the aid of Maximilian the scythe and the Japanese log saw, I got it cleared. I cut off all the alders -- but every single stump sprouted again. Hmmm. Well, this year we have Grappa the grape hoe. Really heavy duty; there is a post in here or two on Grappa. Coincidentally I acquired Achilles the garden tractor. My first thought was "could Achilles pull out these stumps?" The answer turned out to be NO. But stay with me. 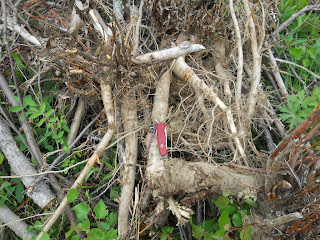 Here you see some pulled stumps. Each stump has two (and only two) roots. Each is as thick as my arm or even thicker. The Swiss Army Knife gives you some scale. I have a big SAK, about 10 cm. Now the interesting part: one root runs east and the other west. The west root peters out much more quickly than the eastbound root. My record eastbound root is something like four meters! (Or 12 foots if you prefer, although why why anyone would prefer Gringo units is beyond me). If it were just one root, I would have not noticed. But I have now pulled eight or so stumps. Every single one of them has its roots going the same way! East much bigger and longer than west. What is going on here?

No scientist can resist a puzzle like this one. I must form an hypothesis, and my current hypothesis is the following: the purpose of roots is to collect water and nutrients. So the Alder has a moisture bias. In fact, the eastbound root is heading in the general direction of my well. The root follows, as we techies say, the moisture gradient. Looking for water, in fact. In all my extensive reading I have never found any reference to this phenomenon. The westbound root is relatively short because it found no water in that direction after a while. North and South were dry. No roots survived in those directions. I find this fascinating. The eastbound root is trying to get at my well!

Operationally, then, the stumping procedure is straightforward. With Grappa the grape hoe, unearth the westbound root -- the skinnier one. Cut it. Tie a rope to the fork of the root, start up Achilles the garden tractor, and pull away. Achilles can handle the single, long, eastbound root. Much easier than pulling by hand.

I am now wondering if people who wish to drill a shallow well in the bush should not bother with a "dowser" or "well-witch" as these people are called. I cannot comment on their effectiveness. But just look for the way the alder roots are growing. They point to water. Fascinating thesis for someone. Won't work for deep wells, of course. Not even alder can get down to fifty meters. But for shallow wells it might work. My well, for the record, is about 3 meters.

If you want a deep well, I think you should consult a hydrologist, a geologist, or both, or even a dowser. Deep wells are tricky. The Beyozova school has a deep well at about 30 meters. But perhaps 300 meters to the west, a neighbor had to go down about 65m to hit, presumably, the same aquifer. You pay by the meter of depth. So be warned.
Posted by JRC at 6:33 PM
Labels: agriculture, Stump pulling