Plan B at the woodshed, Episode I

I probably mentioned that my woodshed -- the original "lash-up" collapsed this winter. I really have to rebuild it, and this time let us try something a bit more permanent. So there was plan A. It is (was) a timber-framed structure. But it is already late July. There would be many, many mortises and tenons to cut. Tenons are no big deal, but mortises are a horse of another color. So I evolved plan B. There are six tall poles in front and three short ones in back. Over these go two long plates. A plate is the top beam in a sturcture (as opposed to the sill which is the lowest). The poles will go straight into the ground. I plan to set them in concrete. So I had to do six holes. 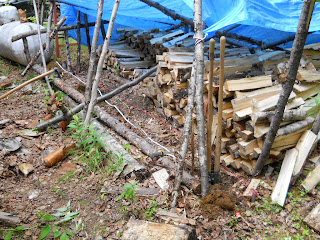 The extreme holes (should) form a rectangle 1.20 meters by 4 meters. This is about the dimension of the eye-built lashup. While toolroom precision is not the order of the day, the holes do need to be aligned and the same depth. For alignment, plain old string is your friend. At hardware stores all over Alaska, they sell a pink nylon string which is ideal for this purpose. For depth, observe my invaluable clamshell digger front and left. Mark it to the correct depth. In my case this is 60 cm which is probably below frost depth. I say probably because that depends a great deal on how harsh the winter is. You should go below frost depth because otherwise the structure will heave. The string is stretched between nails pounded into temporary stub posts.

Digging these holes is both easy and difficult. It is difficult because the upper 10 cm or so are a wild tangle of roots. Once you get past the roots, it is easy. I used a short pruning saw to cut out the roots. So I got five out of six holes dug. The sixth involves moving a whole lot of firewood. I left it for later. I don't want to deconstruct the ex-woodshed because it is protecting about a cord of wood. Do that later.

On to the next step. One could go to Lowe's and buy 4x4s, I suppose. Most people would. But not I, said the little red hen. There is enough dead spruce around Alaska to build a mansion, let alone a woodshed. So allowing for all the allowances, the front poles should be 2.5m x 10cm x 10cm. OK, a spruce log was bucked today to 2.5 meters. Easy. Then it was marked out. This is worth a post all by itself. Now we square the log. I am doing this log freehand. Many reasons. I'll try to explain in another post. First job is to run a guide groove down the log. Snap a chalk line and go. 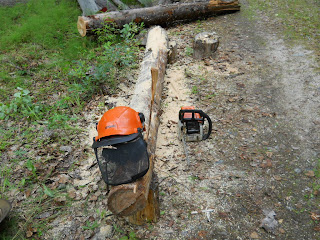 Now make very sure your horizontal marks are level. For this you need a level! The bigger the level the more accurate. Spike the log to the stumps with homemade log dogs (which keep the chainsaw from hitting the ground, a disaster). Now start ripping. Hold the chainsaw absolutely vertical. One reason I did it this way is because I can use Parsifal the Stihl MS 170. It has a very thin bar and does a nice job of ripping without a ripping chain. Every meter or so drive a wedge into what you've ripped. Turn off the saw. Let it cool. Let your back recover. Drive a wedge in every meter or so. After some minutes... 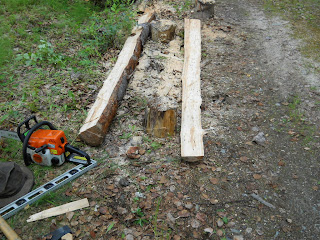 you have done it. We have one flat side. And a slab that may be useful. The guide groove, of course, it to guide the saw. There are lots of practical details. But basically it comes down to being very careful and not expecting perfection. Keep the saw plumb to the cut. I think next time I will tape a small level to the saw.

The rest is a repetition. Level. plumb the log. Guide groove. Rip. And at the end of the day I had a very reasonable 10cm x 10cm.

A lot of stuff left out. But stay tuned. More is coming.
Posted by JRC at 6:22 PM
Labels: chainsaw, squaring logs, woodpile, woodshed